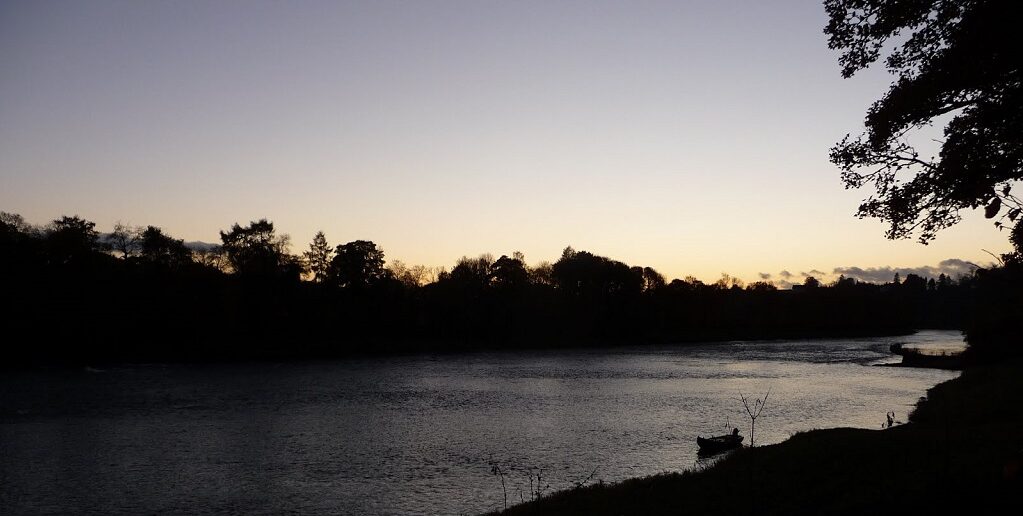 The angler or writer who could accurately predict salmon taking times would no doubt be addressed as the greatest angler who ever lived. Although I think it extremely unlikely that there is someone out there who has the gift, I sincerely hope they keep it to themselves. I for one would give up the sport, if I knew, when and where all my next fish were coming from.

The greatest attraction the sport has to offer, as far as I am concerned, is the aspect of being total uncertain of when I am going to encounter my next fish. There have been times when I go to a river and within a very short period of time I have convince myself that there is no real chance of a fish, even although the conditions appear ideal and the river is teeming with fish. Perhaps by thinking so I am generating failure, but I like to dispel this thinking, by putting my feeling down to experience.

As is usually the case when I think negative my prediction is generally proven correct, not only for myself, but for some reason all the other rods fishing at the time. There are however times on arrival at the river I just know I am going to catch a fish, not only that, but I foreknew the fertile stretches. Some might think that this ability is psychically based. Perhaps with Mystic Meg it is, but I tend to think it is simply due to previous successful experiences fishing a river over an extended period of time. As I keep saying there is no experience like your own experience.

Read most, how to do it books, on salmon fishing and the two most frequently quoted best taking times for salmon are first and last light of the day. Of the two promoted times the last hour of the day is frequently given as the best time to wet a line, especially when the water is low during the summer. Indeed this is a fairly productive time to give a fly swim, but from my own undertakings, very early in the morning and during the night are by far much more profitable times to wet your line during the cloudless warm days of summer.

Are you missing out when the lights go out?
I am not knocking the last light of the day advocates, heavens forbid, after all I fish during, as well as promote, this time of the day fishing myself. Catch returns show beyond all doubt that fish do take well at this time, especially as they start to move about the pool as darkness approaches. Whether this increase in taking attitude is due to the fading light, or the natural increased activity which happens with predators at such a time, or a combination of both I am not sure. Certainly the increased activity in itself seems to heighten the impetus of the fish. Until this time the only salmon activity which usually occurs are the occasional angler teasing excursions to and / or through the surface.

During the long hot sultry days of summer and frequently into the early autumn the water temperatures around dusk are not much different to those which we measure throughout the day. Because of this it can often be more beneficial to fish for salmon at such times as one would fish for sea-trout, i.e. during the so called hours of darkness. Most salmon anglers when everything turns grey start to vacate the pools, just as the sea-trout anglers start making an appearance. To me this is a silly approach. Salmon have excellent nocturnal vision and as such can see a fly in the darkest of nights, just like sea-trout. As such I see no logic in not continuing to fish for them.

Many ardent sea-trout anglers do not like salmon anglers fishing the same pools as them, especially when using their double handed rods. Their dislike is further increased, especially, if the salmon anglers are Speycasting and dumping their lines onto the waters surface, during the execution, of each cast, as they move down the pool.

If the water is private and you are fishing a large river, then I would recommend keeping the long rod, but if you are sharing small pools on association or club water a single hander is probably best, especially if you do not want to return to your car to find the tyres deflated! On starting to fish, the same size of fly, you would use throughout the day, will do perfectly well, but since the water temperature will progressively drop during the night it is advisable to change up fly size periodically in accordance with the differential between the air and water.

Salmon and sea-trout take a fly completely different to each other and as such a different response is needed in order to facility a secure hold. The take of a salmon at night is no different to that throughout the day and as such experienced salmon anglers who fish at night usually act accordingly when the draw on the line occurs. Sea-trout anglers on the other hand who hook salmon when fishing at night generally end up losing them. The reason for this is that when confronted with the take of a salmon they usually, by instinct, strike, in the same way they would a sea-trout. As such any salmon which do take their fly generally only become momentarily hooked.

Anglers who frequently take both species at night will know the instant the take occurs whether its a “fish” or not. These anglers seldom make a mistake and will, because of previous experiences adjust their response accordingly, to meet the taking characteristics of the said creature. Anglers who do try for salmon at such times will find that standard salmon patterns will tempt fish, just as effectively, in the dark, as they do throughout the day.

When fishing smaller rivers, when the water, is only flowing at a level, which allows grilse to move upstream we can fish with leader thickness in tune with the fly being fished, i.e. typically 8 to 10 lb strain. If fishing rivers which have enough flow to allow daily fish migration, even at normal water height, I always opt for a stronger thicker leader when fishing during the night, even if it means limiting the action of the fly somewhat, i.e. go for something in the region of 15 lb.

Yes, this one works just as well in the dark!
My reason for saying this is that in rivers like the Dee, Spey, Tay or Tweed we often find the larger multi – sea winter summer fish, which hold up in the deeper holding pools during the day, moving upstream under the canopy of darkness. The reason for this is that large fish, unlike their smaller kin do not like to expose themselves unnecessarily as they move from pool to pool. Since this is the time when most of the larger fish will be moving upstream, it pays to fish with a heavier leader in case you connect with one of them. Playing a 25 lb during the day, when you can follow it, is one thing, doing it however, totally by touch, when you cannot see half way along the length of your rod is quite another.

Even although fishing at last light and during the night can be highly productive times for salmon the short period of time just prior to the first light of the day, is, from my own experiences, a much more profitable time to wet a line. Just prior to first light the water has had time to cool over night, as a result of this the water is at a more comfortable temperature for the fish.

Another reason, and possible my primary explanation for success at this time is that fish, which have migrated upstream from another pool, or even from the estuary, will, come just prior to the first beam of sunlight, start to take up their daylight lies within the pools. Obviously this period of time will vary with the time of year, and to a certain degree geographical location, but for example during the middle of June in the south of Scotland and to the same in July this period of productivity often occurs around 3.00 a. m.

Sometimes fish will continue running until the sun is almost full on the horizon, but it seems to depend on the actual condition of the river at the time and the position of the sun in relation to the river. When the sun breaches the horizon and happens to be shining upstream, i.e. on to the tails of the fish, it does not seem to put a halt to the upstream proceedings. However, if the sun starts shining directly down the pool, straight into their eyes, when it violates the horizon the fish quickly put the brakes on. Quite often if I happen to be stationed near the tail of a pool, just before sun up, I often see, especially, in the thinnish in water, in the tails of glides and pools the bow waves of the fish as they enter the pools. Where the bow wave seems to stop, usually just where the water starts to deepen, this is the place we should casting our flies.

Most fish when they enter a pool seem to stop in the same place and because of this all one has to do is stay put and intercept the possible takers. Generally I have found though that within a short period of time, of the sun making an appearance, over the horizon, regardless, of its station, most running activity ceases. If you arrive on the river to find the dawn chorus in full swing when the river is running at normal height the most productive time will almost certainly have past.

In order to maximise your chances of tempting a fish you must be fishing before the birds air their cacophony. If the river has a little extra volume between its banks the running and taking time is sometimes extended for a short while, but this depends on the freshness, as well as the numbers of fish present. Stale fish which have been in the river for some time, and merely moving upstream by only a pool or two usually start to settle into their new lies before their fresher cousins. I have no real idea why this is so, but I tend to think it is simply due to the highly excited state of the new arrivals. They need to go just that little bit further.

The tackle and tactics for fishing before the early birds are not universal for all rivers. On some rivers the rod length required may be no more a single hander, while on the larger river systems a 15 ft rod will still be the one to use. If the river is running at normal height a floater will suffice, but if there is any additional water height, a suitable sinking polyleaders, or full sinking line must be chosen to stop our flies swimming too close to the surface.

Flies again depend on the water conditions, if the river has no extra volume and the night has not been too cold a slight increase in overall size from that used throughout the day is normally all that is required. However, if the water temperature has dropped quite significantly overnight, or there is added flow volume you cannot go far wrong if you use a fly double the length of that which one would choose to use during the day.

Alexander has fished for salmon for almost 50 years and is a retried Fly fishing instructor. He is the author of two books: Salmon Fishing on River and Stream and Progressive Fly Fishing for Salmon.