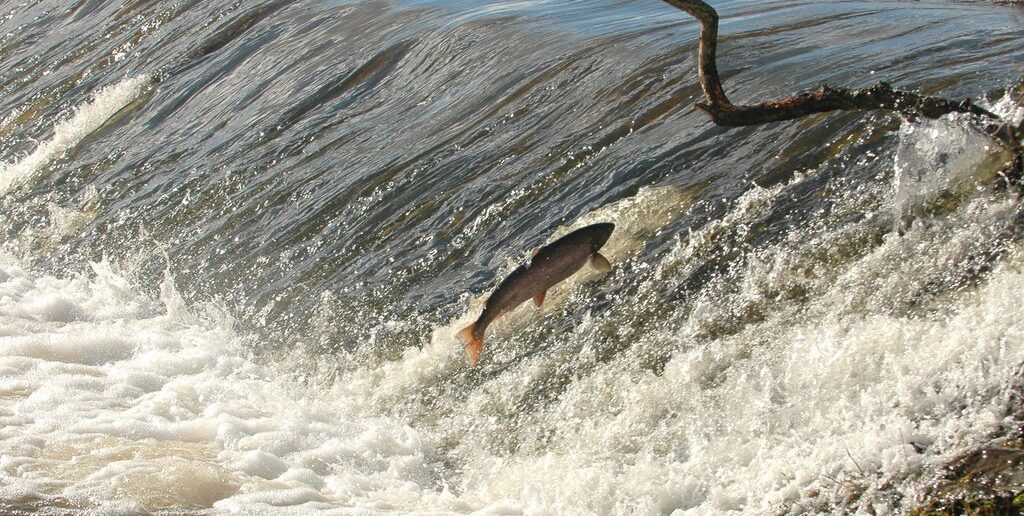 The River Nore rises on the Devil’s Bit Mountain in County Tipperary, just over a mile from the source of its sister river, the Suir. It starts out flowing in an easterly direction, passing through Borris-In-Ossory, and Castletown, before swinging south towards Durrow. From Durrow it continues South through Ballyragget, Kilkenny City, Bennettsbridge, Thomastown and Inistioge, before joining up with the Barrow, just upstream of New Ross. A total of around 87 miles.

Thomastown Salmon Weir on the River Nore.
The Nore starts out on a sandstone base but eventually changes to limestone. It is tidal from Inistioge on downstream to the confluence with the Barrow. The flow of the Nore is punctuated by many weirs, which were used by the numerous mills along the river. This has created a lot of slower water, interspersed with some streamy glides, especially on the upper part of the river.

The main Salmon fishing is from Inistioge up to the confluence of the River Dinan, upstream of Kilkenny City, with the best fly water being around the Thomastown area. The Nore Salmon runs have always come under a lot of pressure from poachers (unfortunately a common issue in Ireland), and also from drift netting in the estuary. In the past few years many of these drift nets have been decommissioned, and that has helped the fishing, but like many other Irish rivers the poaching is still an issue.

The tidal water on the River Nore below Inistioge.
The spring fishing can be a little patchy; the Grilse runs are generally pretty good, especially in May, but the autumn fishing through August and September is where the Nore really shines. Quite a few fish over 20lbs have been banked (in autumn) over the past few years, with the average fish being around 8lbs.

The River Nore is pretty wide in places and has plenty of trees on the banks. Most anglers will use a 15 footer, but you can get away with a smaller rod, even a single hander. You’ll need to wade in much of the Nore, and even though you generally need chest waders, the wading is safe.

The Town Water on the Nore at Thomastown.
The Brown Trout fishing on the Nore is excellent, especially around Thomastown, and on the Kings River. The best of the trout fishing is from early season to mid-June on the tributaries and throughout the season on the main river. Let’s take a look at the fisheries:

The Inistioge Anglers water is the first above the tide. It’s almost all Salmon fishing and consists of ¾ of a mile of double bank fishing around the village. This is good water for springers right from season open in February. It is best fished in low water.

Nore guide, Jim Brown with a 20lber taken above Inistioge.

This is another low water fishery, which consists of 2/3 of a mile of single bank (right bank) fishing, starting just downstream of the Brownsbam bridge (where the R700 crosses the river about 1 ½ miles above Inistioge). This stretch has some nice streamy water, mixed with holding pools.

The Kilkenny club has almost 10 miles of segmented fishing on the Nore, and a couple of miles in the River Dinin. The first stretch on the Nore is on the left bank from Ballyragget Bridge (N77) down to Lismaine Bridge (on the Lismaine Road, about a mile west of the N77). The next stretch is on the left bank from the confluence of the River Dinin down to Bleach Green, on the Northern outskirts of Kilkenny City.

The club also has left bank fishing from Maddockstown PO down to about a mile above Bennettsbridge (about 2 ½ miles in total), and a stretch at Holden’s and on both banks around Brownsbam Bridge (R700 crossing 1 ½ miles above Inistioge).

The Nore’s Jerpoint Stream at Thomastown.
Much if the club water is perfect for the fly, as its fast and streamy. There are some fly only stretches. There is also good trout fishing on the Kilkenny Angling club water.

The Thomastown club has 4 miles of double bank fishing both above and below the town. It is arguably the best Salmon fishing on the Nore and in recent years that means it’s very good. It has definitely got the best fly water of all of the fisheries, with beautiful streamy water.

The River Nore below Thomastown.
The club waters here fish well throughout the season and can be prolific in the autumn time with teh occaisional monster over 20lb. The Trout fishing here is also very good.

Mount Juliet has 3 miles of double bank fishing upstream of Thomastown and a mile of right bank fishing on the Kings River (from the confluence with the Nore). The Salmon fishing here is mostly Grilse and autumn fish but it too can be very good with the right water.

Norelands Bridge at Mount Juliet on the Nore.

The Durrow & District Anglers have water on the Nore, the Ouveg River, the Erkina, and on the River Goul. Their water on the Nore extends from Watercastle Bridge downstream to the confluence of the Ouveg River. This used to be to be excellent Salmon water, but that was prior to the 70s. The great pools back in those days were, the Meetings (at the confluence of the Erkina), the Mossy Rock, Anker, Commons hole, and Hastings, amongst others.

Nowadays few Salmon make it this far up the Nore, mostly likely because of poaching further downstream. Even the excellent autumn run seems to stop short of Durrow now. Still, the trout fishing here is really good and you can get fish up to 3lbs.

River Nore below Thomastown Weir.
The club’s water on the Erkina River is from Boston Bridge down to the old mill at Durrow. On the Goul it is from Boden’s hole to the confluence with the Erkina. They also have water on the lower parts of the Ouveg River.