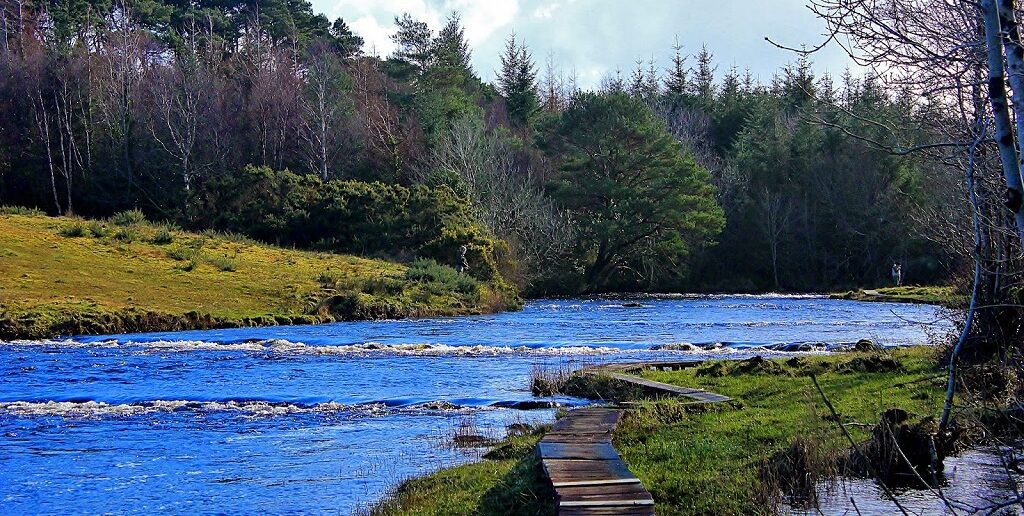 The River Drowes rises out of Lough Melvin and takes a Westerly course for just under 5 miles until it enters the sea just above Tullaghan. It really is a great spring fishery, and is managed primarily by the Drowes Salmon Fishery at the Lareen estate. Patrick Bradley does have a little fishing on parts of the right bank.

Fishing the River Drowes.
The Drowes is one of the early rivers in Donegal, opening on the 1st of January. It often accounts for the first rod caught Salmon of the year in the whole of Ireland. Indeed it has become somewhat of a spectator sport, watching when the first Salmon will be caught on the Drowes. There is no shortage of anglers willing to brave the cold Irish January weather, in order to be the first to bank a bar of Silver.

The Mill Pool on the Drowes.
The first section of the River Drowes from Lough Melvin down to the Four Masters Bridge is mostly for those anglers staying at the holiday bungalows at Lareen Park. This run is composed of lots great fly fishing streams, punctuated by some nice pools.

The second section runs from the Four Masters Bridge down to Lennox’s Bridge. It’s also a fast flowing part of the Drowes, which fishes best in medium to low water.

Just below Lennox’s Bridge. Good spot for fish.
The third and last section runs from Lennox’s Bridge down to the Tullaghan Bridge, and the Sea pools. The upper part of this run is nice streamy water, whilst the lower part is deeper and relatively slower water. The original Sea pool is at the bottom of this run and can offer a good chance of a fish at high tide.

Although the fishing starts on the 1st of January, the spring fish don’t start running in any great numbers until the start of February. The spring fishing remains good through to April and May. The Drowes also gets some summer and autumn fish.

The final stretch to the sea at Tullaghan (Photo by Louise Price).
The Grilse run starts at the end of May and continues to its peak through June and July. The river doesn’t get much of a run of Sea Trout, but during June and July evenings, you’ve got a chance of a Gillaroo. These are Lough Melvin trout, which are a Golden colour. You’ll need to switch over to small white flies for these, snail feeding trout. There is also good Brown Trout fishing on the Drowes but it is mostly ignored in favour of the Salmon.

River Drowes at the Island Pool.
The Drowes can be fished mostly from the banks, where an 11 footer should be sufficient to cover most of the runs, in normal conditions. In windy conditions you may want to switch over to something a big bigger at around 14 or 15 feet. The River is mostly shallow but wading isn’t encouraged. Still, if you’re going, take the waders just in case. The Wilkinson Shrimp, Apache Shrimp, Foxford Shrimp and the Bann Special are all good for taking fish.