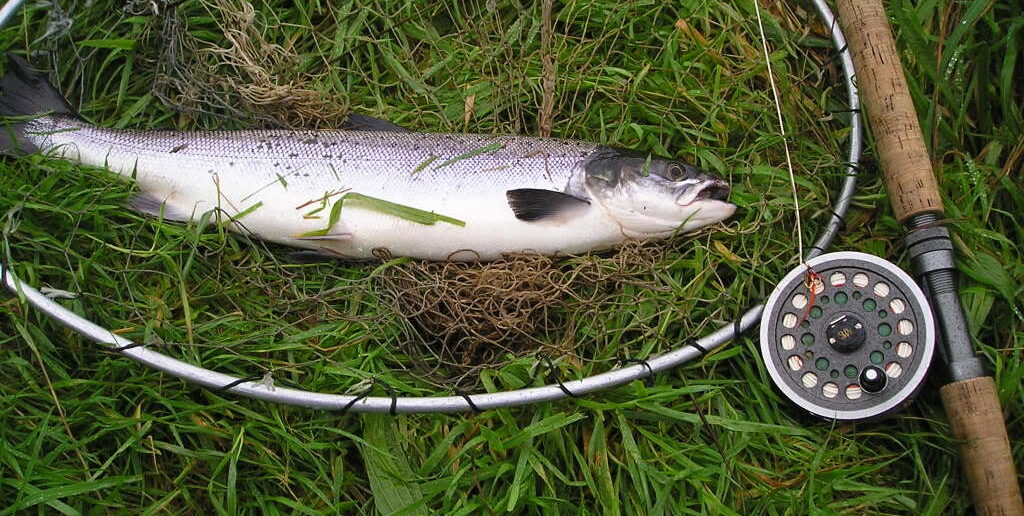 The River Owenea flows out of Lough Ea, in the Western side of the Blue Stack Mountains of Donegal, and follows a Western course past Glenties, into Loughrosmore Bay just above Ardara.

The Owenea is a great Salmon River, which is owned by the Northern Regional Fisheries Board. It is very well managed and presented, with lots of named pools, and beat maps provide by the board.

Finns pool on the Owenea.
It’s a spate river of some 16 miles in length, although most of the fishing takes place in the last 8 miles before it enters the sea. The spates on the Owenea generally run off in1 or 2 days, giving plenty of time to fish in prime conditions

The fishery consists of 9 beats, each of which, takes anywhere between 3 and 5 rods. These rods are available on day tickets, on a first come first served basis. The banks are reasonably well developed with stiles and footbridges. The access points and beat information is available on the Northern Region Fisheries Board website

The Owenea fishery has had a lot of work done to it as part of the TAM programme. It now has many facilities for anglers, including toilets and hospitality at the angling centre as well as access for disabled anglers along a section of Beat 3. There is much ongoing work on things like, access, angling structures, and habitat restoration, which should leave the river in good stead for future generations.

Owenea River Beat 9.
The Owenea gets a run of spring salmon over the course of April and May, with the fish in the 8 to 12 lb range. The Grilse run starts in early in June, with July and August being the peak months. September fishing is also reasonable on the river. Fly fishing is the most popular method on the owenea, and the majority of the fish are taken in this way.

This is the longest beat on the river and per mile of river; it’s probably the most lightly fished, with most of the fishing taking place on the lower parts of the beat. The beat stretches from Lough Ea down to Meenhalla Footbridge (where the R253 comes close to the river for the last time before it meets the N56).

This one runs from the Meenhalla Footbridge down to the Mullenierin Bridge (where the river ducks under the N56). The best pools on this stretch are Garry’s and the Priest pool. Incidentally the Owenea Angling Centre is just on the other side of the bridge).

The wide open banks of the Owenea.

Starting at the Mullenierin Bridge, this beats runs down to the Mullantiboyle Bridge, as the river moves away from the N56. This beat also includes the lower reaches of the Stracastle River. The top pools on this stretch are the Crambam, Rock Pool and Friel’s Battery. You also have a good chance of a Sea Trout anywhere from Friel’s Battery to the Short Stream.

This beat runs from Mullantiboyle Bridge to the metal footbridge below Hugh Hanlon’s pool (as the river makes its way back to the N56). This entire beat is very good and should be fished from top to bottom.

There are some tress amongst the mooreland settings.

Beginning that the metal footbridge, this one runs down to the new wooden footbridge below the Gubbin. The two main pools are the Gubbin and the Mullindaragh. The Gubbin is more of a spinning pool but can be fished with the fly if there is good water. The Car Pool can also fish well. There is no worming permitted from the neck of Ward’s pool to the tail of Archie’s Pool on beat 6.

This beat runs from the New Bridge below the Gubbin, to the Turf Bridge below Carry Pool. The Carry Pool is another one where worming is popular. Archie’s Pool, the Yellow Banks and the Battery, all produce their fair share of fish, and can be prolific at times.

This beat extends from Turf Bridge down to the metal footbridge, downstream of the Trees. The water towards the lower part of this beat is slow & deep, so it needs fairly high water to move the flies. The better fly water on the beat is in the upper reaches, and around the Coarse Stream and Sally’s Pool. Kelly’s is a deep pool and can habour some big fish. The Lugguog and the big stones that can be seen below it can fish well in fairly high water.

A view of Beat 8 on the Owenea.
Running from the metal footbridge at the bottom of beat 7, to the metal footbridge at the car park below the Whingarden Pool, this is one of the most productive beats on the river. It contains some nice steamy fly water. Like many of the lower beats, you’ll need a 14-15ft rod to fish it. The most famous pool is probably Bryan’s Pool. It is a deep holding pool that is always full of fish. Other productive pools include Gavigan’s, Billy’s, Sandy and McGill’s Long Pool.

Another pool on Beat 8 on the Owenea. Water is high but fishable.

The last beat before the sea, runs from Poul-a-Tuarn (below the metal footbridge) down to the Owenea Road Bridge (the R261 crossing) at the tail of Finn’s Pool. There is some good fly water, interleaved with deeper pools. Finn’s Pool at the bottom of the beat, backs up with a high tide and can fish well as fish come in on the tide. Other productive pools include Boyle’s and Boyle’s Small pool. The top of the beat at Poul-a-Tuarn is best fished with the worm. Also Ferny Pool & Holly Bush down to Boyle’s are worthy of close attention.