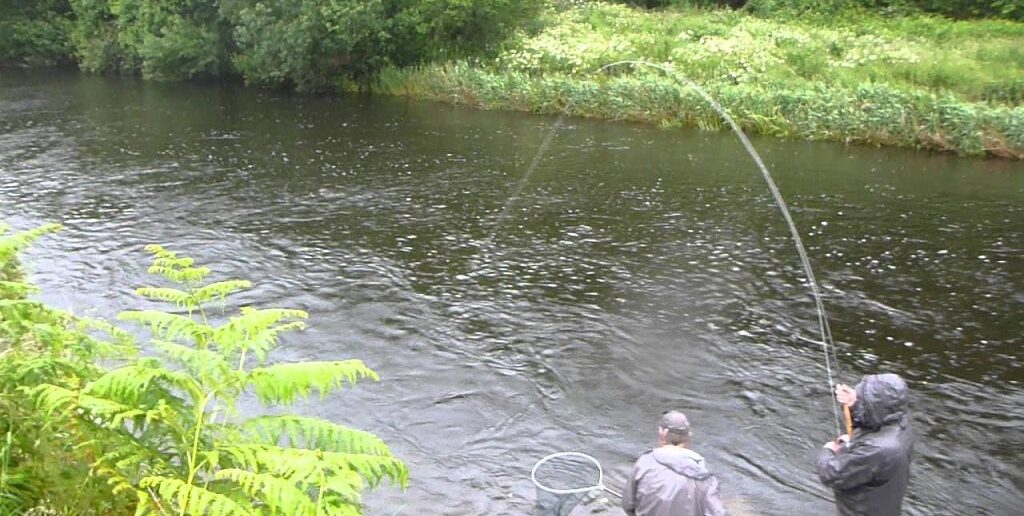 The River Bandon rises in the Sheehy Mountains of County Cork and flows in an easterly direction towards the sea at Kinsale. The river travels a distance of 72km and passes through the towns of Dunmanway, Ballineen, Enniskeane, Bandon and Innishannon. The tidal estuary extends from Innishannon down to Kinsale, which is around 15km.

The Bandon has the characteristics of a spate river, due to arterial drainage on the upper river. It is pretty big in places but can be covered mostly with a single hander of around 11 foot, except maybe in higher water where a 13 footer will make things easier. Wading is easy enough as the river has a mainly gravel bottom, but chest waders are useful in places.

The weir above Bandon on the River Bandon.
The Bandon River gets a good run of spring fish, which tend to run straight through the lower reaches to Bandon weir, when the water is high. In low water you can connect with a springer anywhere between Innishannon and Bandon weir, with the best month being May. The majority of spring fish are taken below Bandon weir. The Grilse start running at the beginning of June and the run peaks during July. The Bandon also gets a decent run of larger autumn fish, through August and September, but as with spring and summer, the water levels are important for success.

Salmon fishing on the River Bandon extends from Innishannon right up to near Togher, but the best fishing is from Innishannon up to the Desert Bridge (about 4km downstream of Enniskeane). There is also some decent water between Ballineen bridge and the Manch bridge (on the R586), and from Manch bridge up to Ballyboy bridge (East of the R599). There are few salmon pools between Long Bridge (on the R586 at Dunmanway) and the Ardcahan Bridge (on the R587 as the river turns west towards Togher). The fishing at the top end of the river is very dependant on the spates.

The bridge at Innishannon on the Bandon River.
The Bandon gets a very good run of Sea Trout, which enter the river in late March, early April, but the bigger shoals come in June. July is probably the best month. Fly fishing at night is most successful with the most popular stretches between Innishannon Bridge and the cemetery at the Cork City side of the village. Worm fishing is also successful. Butcher, Alexandra, Biblio, Teal Blue and Silver and Connemara Black are the most popular flies with bigger lures also catching fish on the darker nights. Worm fishing is most successful with light gear and brandling worms.

If the salmon fishing is not up to scratch, the river offers good alternative sport, via the large population of brown trout. It gets all of the usual fly hatches such as olives, sedges, midges, black gnats and stonefly; the stonefly being a good sign of clean water.

The fish counter on the Bandon weir, River Bandon.
A lot of the fishing on the Bandon is managed by clubs, with some private beats and a little free fishing below the bridge in Innishannon.

The salmon fishing below Innishannon Bridge is free and is best during the summer, when the Grilse are running. The springers tend to run on through to the weir above Bandon. In low water fish will hold up in the Carrig pool across from the GAA pitches at Innishannon, and fishing here can be very good. It is best fished with the worm or shrimp. Another good spot is the Bridge pool just below the Innishannon Bridge.

The Bridge pool on the River Bandon.
The Sea Trout fishing can be especially good in July with nighttime fly fishing often producing the most fish. The best Sea Trout stretches are between Innishannon Bridge and the cemetery at the Cork city side of Innishannon village.

Note: No fishing below the bridge before the 17th of March.

There is a 3/4 mile private strech above Innishannon bridge which is private syndicate water, owned by Goods on one side of the river and Driscolls on the other. Above that is the beginning of the Bandon Anglers water.

The Bandon Angling association has about 7 miles of fishing above and below Bandon Bridge. Below the bridge, the club water extends down to the Ms. Lones beat, which is just before the private stretch above Innishannon Bridge.

The Ms Lones beat on the Bandon Anglers water.
In low water you can bank a salmon anywhere in the club waters but in higher water you’ve a better chance further up towards Bandon weir, as the fish tend to run right up to the weir and hold waiting to run it.

Confluence with the River Brinny at Ms Lones beat

The Ballineen and Enniskeane Anglers have 4 miles of fishing and day tickets are available for visiting anglers.

The Manch Fishery consists to 2 miles of double bank fishing and has 10 named pools. Manch is on the R586 from Bandon to Dunmanway. This road follows the Bandon River through Enniskeane and then Ballineen. Manch House is on the northern (or right hand) side of the road approximately 2 kilometres on the Dunmanway side of the Carberry Milk Factory.

The Kilcoleman Park Fishery is situated in the Kilcoleman estate about 6 miles west of Bandon. It has 1.2 miles of private fishing, which is generally let to those availing of the estates’ accommodation. The Kilcoleman fishery has 10 named pools and the fishing is by fly only.

The Kilcoleman Fishery on the River Bandon.

The Dunmanway Salmon & Trout Anglers has about 10 miles of fishing from Manch Bridge up to Togher castle. The best of the salmon fishing is on the lower part of this water from Manch Bridge to Ballyboy Bridge.