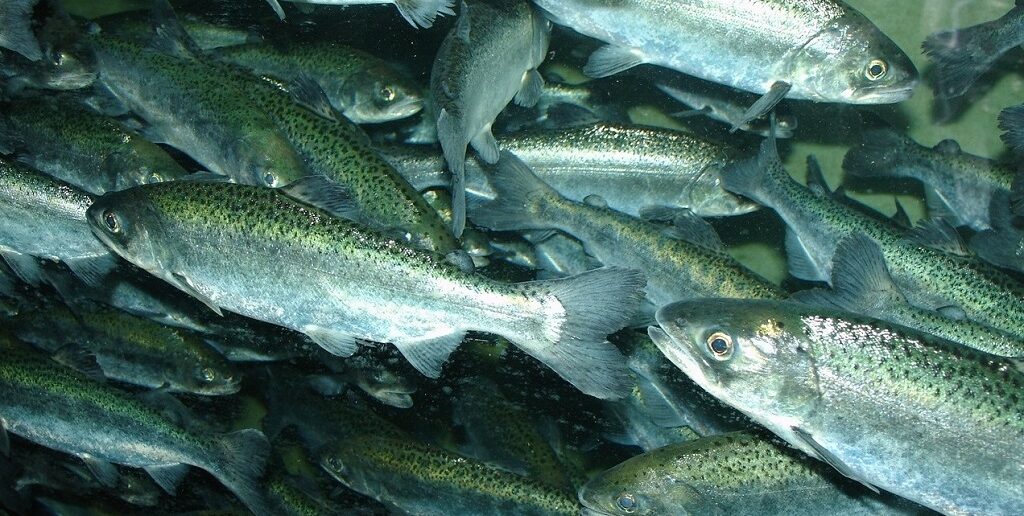 20,000 salmon alevin lying motionless in the tank
The Moyola has a labyrinth of little tributaries, ideal for salmon nursery. But generations of intensive farming have left many devoid of fish. With the salmon fry secured in buckets infused with oxygen, they are transported across mountains, to little-known and remote streams, which are little more than large drains. It is here we believe that the salmon had intended to plant their eggs, safe from the hungry trout in the main river further downstream.

Two week old salmon alevin
In the last ten years, a number of these streams have been renovated, with the creation of pools and clearing of bushes to allow daylight to sustain aquatic life. The sad fact is, that many of the fry which we have painstaking hatched through cold winter will perish from the harsh realities of the river. But just one or two per cent of the 100,000 fry [average]we release could yield an additional 150-200 adult salmon [mostly grilse]in four years time.

It is this hope that keeps us going, and indeed, we have seen fish return to the same tributaries, which for years remained derelict. I realise, there’s a huge debate surrounding hatcheries, but maybe the Moyola is unique, in that many of the salmon which are captured are being offered the opportunity to successfully spawn, instead of abandoning their eggs on the unforgiving concrete of the many weirs on our system. And the hatchery itself has acted as a key educational tool for our upcoming generation of anglers, who have gained a whole new respect for these kings of the river, with many adopting a catch and release policy, which is of course already compulsory in many of the top rivers of the world.

One year old salmon smolts from the Moyola hatchery
The Moyola salmon endures countless trials, from the inhospitable River Lower Bann, to the poacher’s nets in Lough Neagh, before finally taking on the countless weirs of the Moyola. Not to mention, the worrying survival rates of salmon at sea. And it is for these reasons that, we in the Moyola Angling Association feel compelled to help this remarkable species endure in our river. We have a number of dedicated anglers / conservationists such as Mervyn Finlay, Barney McNicholl, Michael O’Kane, Greg English, Sean McWilliams, Joey O’Neill, Ciaran Bradley and Eugene McCormick to name but a few who have braved the cold winter floods year after year to help the Moyola salmon.

Michael is a prominent member of the Moyola Angling Club, and has been involved with the hatchery at Cahore for many years now. He also maintains the club’s website. You can contact Michael by visiting the club website at Moyola Angling Club.