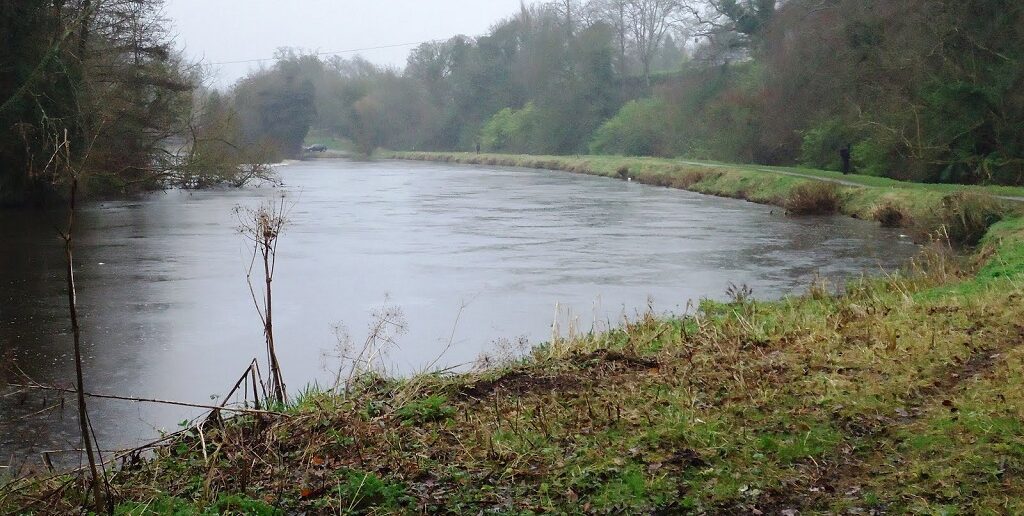 The River Boyne rises in County Kildare and makes its way East for more than 70 miles, through Trim (County Offaly), Navan and Slane (County Meath) and Drogheda (County Louth), before entering the sea between the villages of Baltray and Mornington (just East of Drogheda).

The Boyne is famous for its Brown Trout fishing but it also gets a good run of Salmon and Sea Trout, especially in the summer months. The vast majority of the Salmon fishing is on the lower part of the River between Drogheda and Navan, and on the lower reaches of the Kells Blackwater (which is a tributary of the Boyne). You can get fish upstream of Navan, at Bective and Trim but they are not that plentiful. Slane Bridge on the Boyne (Photo by Jonathan Billinger)

The spring fish usually start running in early March and keep going until the end of May, They run right through to the stretch between Slane and Navan. The main spring fishing effort is concentrated around Navan, and on downwards to Slane. The river used to get a decent run of big 3 winter fish of between 20lbs and 30lbs, but that has dried up in recent years and most spring fish now, are around the 10lb mark. The Ramparts and Sophies Island are a couple of the best spring locations.

The Grilse begin running in July and continue through until the end of August. The best of the Grilse fishing is from Oldbridge, upstream to Slane, with the best areas being, Oldbridge, Staleen, Crewbawn, Johnstons and the Scabby Arch. Slane to Navan also yields a decent number of Grilse each year.

The Boyne also gets a decent run of autumn fish through August and September, some of which can reach upwards of 20lbs. In low water conditions, autumn fish can back up in the stretches below Slane, giving excellent sport up as far as Navan on each flood. The Sea Trout begin running from late April, right through until the end of September, with the best fishing being in June and July. The area for Sea trout fishing is around Oldbridge but you’ll get a sprinkling up fish right up as far as Navan. Below the Obelisk Bridge at Drogheda is particularly good. The average weight of sea trout is 1.5lbs with larger sea trout to 5lbs being caught on occasion. The Sea Trout average about 1.5lbs but the River does get fish up to 5 and 6lbs. Fly fishing at night is the most productive method but the Boyne Sea trout do feed on river insects on summer evenings, especially during heavy hatches of Blue Winged Olives and sedges.

The majority of salmon fishing on the River is controlled by Angling Associations, but there is some private water controlled by syndicates and individuals. All legal methods are permitted on the river, but spinning and bait are the most popular methods. The Boyne is not great for Salmon fly fishing, but there are still fish caught on the fly. It’s a big river so a 15 foot rod is recommended. Wading is possible in some stretches but you should check locally when obtaining your permit.

The River Boyne is an excellent Brown Trout fishery, with the average being about ¾lb, but with plenty of trout up to 6 or 7lb. It is a limestone river and has all of the associated hatches, such as olives, sedges and the mayfly Ephemera danica. The best spots include, the Navan area, at Kilcairn, Blackcastle and Dunmoe. There is also good trout fishing in the Stackallen area and downstream of Slane at the Scabby Arch, Crewbawn, Johnsons, Rossnaree and Staleen. The River Boyne at Dunmoe

The club runs the Rathmullen and Mell Fisheries, which are both on the tidal water. The fishing starts at an area known as ‘Pass’, which is just over a mile below the Obelisk Bridge, near where the M1 motorway crosses the river, and extends downstream towards Drogheda. This is really good Salmon and Sea Trout water, especially in the summer months.

Drogheda and District also have fishing at McDonnell’s Fishery, just downstream of Newgrange weir; at Staleen and Donore on Fulham’s Fishery; and at Law’s Fishery. These fisheries produce plenty of Salmon, Sea Trout and Brown Trout.

The club has three main fisheries between Drogheda and Slane. Taken together, these fisheries produce large numbers of Salmon, Sea Trout and Brown Trout every year. The club offers day tickets on all of this water. Dollardstown Weir between Slane and Navan

The Oldbridge Fishery at Oblisk Bridge is the best for Salmon and can be prolific at times, especially on the famous Curley Hole, where many Salmon are banked throughout the season. This fishery consists of 3 miles of double bank fishing, from the confluence with the river Mattock (near Littlegrange) to an area known as ‘Pass’ (near the M1 Bridge).

Marry’s Fishery starts at Marry’s Weir, just above the Curley hole, and extends for ½ mile. The fishery is run by a syndicate, and is very productive for Salmon and Sea Trout.

The Ballinacrad Syndicate Water consists of about two miles of single and double bank fishing at Dowth. This water holds Salmon, Sea Trout and Brown Trout throughout the season.

Lord Henry Mountcharles has about 3.5 miles of double bank fishing from below Slane Bridge to upstream at Beau Parc. The fishing from the Castle Weir downstream to Scabby Arch is let to a local angling club whose membership is confined to anglers resident within two miles of the village of Slane. None of this fishing is available on day tickets. This fishery is just half a mile of single bank fishing, but it is good Salmon water throughout the season. The fishery is on the right bank, about half way between Navan and Broadboyne Bridge (also known as the Stackallen Bridge). If the Salmon go off you can always have a go at the Brown Trout, which can get up to over 5lbs here!

This club has about 6 miles of fishing on the River Boyne on either side of Navan. Upstream of the town, the fishing extends for about a mile on the right bank and for 21/2 miles on the left bank. This is mainly Brown Trout water, but it produces a few Salmon as well. The stretch below Navan is about 2 miles of double bank fishing and includes quite a bit of the famous Blackcastle Fishery. It has another one mile stretch of the Dunmoe Fishery. Both of these stretches are very good spring beats and often produce 20lb+ fish. The Grilse fishing isn’t as good here but there is a good run of autumn fish on the back end. Many people ignore the excellent Trout fishing on this stretch as the Salmon fishing is so good. The weir at the famous Blackcastle Fishery

The club also has access to several fisheries on the Kells Blackwater between Bloomsbury’s Bridge and Navan, some of which are through an arrangement with the Kilbride Angling Club. This water totals about 6 miles and is excellent Brown Trout, with a chance of Salmon as well.

Day tickets are available on all of this water.

The Dalgan angling club water is not well known as a Salmon fishery but it does produce some fish. The Stretch is from Ballinter downstream to near Kilcarn (which is close by the N3). It also has trout fishing on the River Skane, which can be very good, albeit the trout are fairly small. The Boyne from Ballinteer Bridge (Photo by Jonathan Billinger)

Bective Angling Club has various stretches on the River Boyne from Lally’s Island, down past Bective Bridge and Assigh Bridge and almost to Ballinter Bridge. The club’s waters are private and there are no day tickets available.

The club has longish stretches on the Boyne from Scarriff Bridge (R156) downstream past the town of Trim to Lally’s Island. There are a few private parts on this water. Being quite a distance up the river, the club waters depend heavily on the flood waters to take the fish up. It’s really a spring and autumn Salmon fishery, which can be hit or miss. The best Salmon beats are just below Scarriff Bridge, just above Board’s Mill, at the confluence of the Knightsbrook River and at Lally’s Island.

The Brown Trout fishing is excellent on the club waters, with lots of fish at ¾ of a pound or better and some getting up to 2 and 3lb.

Visiting anglers are welcome and most seasons, club membership is open.

Longwood Angling Club has 6 miles of fishing on the Boyne between Scarriff Bridge and Leinster Bridge (just off the R160). It also has some fishing on the Enfield Blackwater extending from Johnstown Bridge down to the confluence with the Boyne. This is pretty much all Trout Fishing, with some decent sized specimens (up to 5lb).

To fish in Ireland you need a rod license from the appropriate fishing authority. You can find the details for the River Boyne at:

As well as a rod license, you’ll need a permit to fish the River Boyne. You can get permits from any of the following distributors:

The club has some water between Navan and Slane

The club has water on the Boyne from Ballinter down towards Kilcarn (near the N3), and some trout water on the River Skane.

The club has 1.5 miles between the M1 motorway crossing below Obelisk Bridge down to Drogheda. It also has fishing at Mc Donnell’s, Fulham’s and Law’s Fisheries.

The club has some water near Dunmoe.

The club has 6 miles of fishing on the Boyne between Scarriff Bridge and Leinster Bridge (just off the R160). It also has water on the Enfield Blackwater from Johnstown Bridge down to the confluence with the Boyne

The club has several stretches on the boyne, either side of Navan and several other fisheries on the Kells Blackwater between Bloomsbury’s Bridge and Navan.

The club runs the Oldbridge Fishery at Oblisk Bridge, as well as Law’s and Johnston’s fisheries, further upstream.

The club waters on the Boyne from Scarriff Bridge (R156) downstream past the town of Trim to Lally’s Island. There are some private fisheries on this strech as well. The club also has stretches on the Trimblestown River as well.