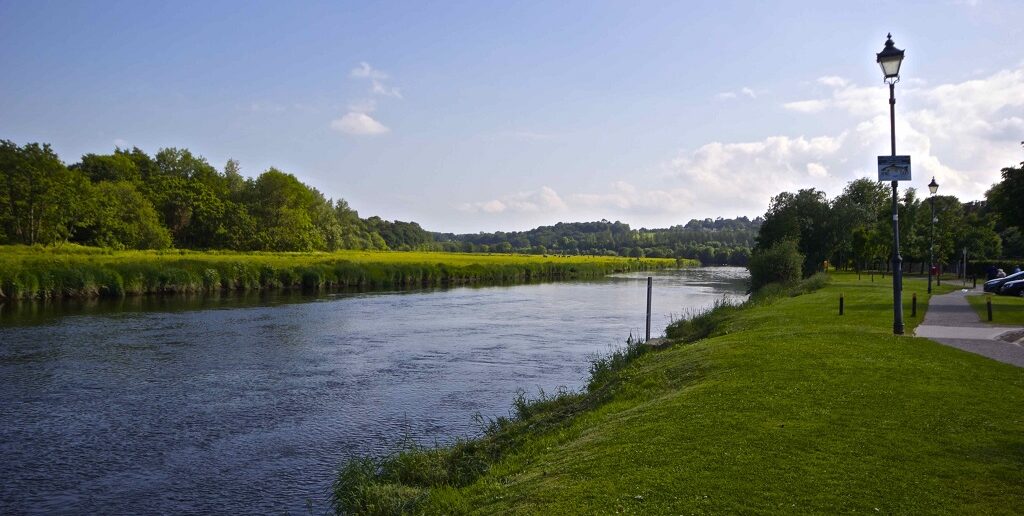 The River Slaney rises on the Western slopes of the Lugnaquilla Mountain in Wicklow, and flows in a Southerly direction through Baltinglass (Wicklow), Rathvilly (Carlow), Tullow (Carlow), and Bunclody (Wexford) before discharging into a narrow 12 mile long estuary just South of Enniscorthy, and finally into Wexford harbour.

The River Slaney at Enniscorthy (Photo by Jonatahn Billinger).
The estuary from Enniscorthy Bridge to Ferrycarrig Bridge is heavily netted, which is a cause for concern, but not in the spring as plenty of fish get a clear run on the Slaney, which makes it one of the best spring fisheries in the country. The river also gets a decent run of Grilse and Sea Trout.

The upper river Slaney above Bunclody is very narrow and relatively shallow with lots of streams and glides. As you move downstream the valley widens and the water becomes deeper. Generally the river would be characterized as medium sized, relatively fast flowing river.

Nice fly water on the Slaney.
In the springtime with lots of water the river is perfect for Salmon fishing, right up as far as Tullow. The average fish is 10lbs but there have been plenty taken at double that weight. The river is sometimes referred to as the Queen of Irish Rivers, due to the prolific nature of its spring fishing.

The best of the spring fishing is from the opening day until the end of March, but you can still take springers through April, and even into the beginning of May. There is a big run of fish in May but the nets claim most of these. If the water is cold the fish tend to stay below Bunclody but in milder weather they venture on up as far as Tullow. Spinning is the most popular method in the spring, with the majority of the fisheries not permitting worm or shrimp.

From the 1st of April it is fly fishing only above Ballycarney Bridge, which is about half way between Enniscorthy and Bunclody on the R745. Wading is generally not allowed unless in places where the fishery has double bank fishing. You’ll also find that Spey casting will be useful because of the overhanging bushes in many parts of the river. A 13 or 14 foot rod with a sink tip line will be perfect for most of the water.

One of the Slaney weirs.
As the summer arrives in June, the water tends to run off very quickly due to the speed of the flow and the extensive drainage that has taken place along course of the River Slaney. The Grilse run is just average because of the low water and the nets (which start on the 12th of May). Fishing is also more difficult because of the weed growth. Still if you get a flood in conjunction with the spring tide then it can be worth a throw.

The Slaney also gets a decent run of Sea Trout, which starts in mid June, peaks about mid July and runs through until the end of August. The best of the Sea Trout fishing is from Bunclody down to the estuary, including the free stretch from Enniscorthy Bridge down to the confluence with the River Urrin.

Other notable stretches here are: from Scarawalsh Old Bridge (on the Old Dublin Road just upstream of the N11) down to the confluence of the River Bann; from Clohamon Weir (2 miles downstream of Bunclody) down to Moyeady (near the N80), and the water opposite the cemetery at Bunclody. Fishing is fly only from Ballycarney Bridge up to Aghade Bridge after the 7th of April, and below Ballycarney from the 1st of May.

A view from Scarawalsh Bridge (Photo by Liam Murphy).
The Slaney also has a great Brown Trout stretch from Tullow upstream to Baltinglass. The fish are relatively small but there are vast numbers of them and the evening rise is a sight to behold. The river does get some Mayflies but olives and sedges are the mainstay of the Slaney trout. There are some clear banks but if you have to wade then note that it is pretty easy above Rathvilly but difficult around Tullow. You’ll need chest waders on most parts of the River Slaney.

The fishing on the river is controlled by a mixture of angling clubs and riparian owners, except downstream of Enniscorthy Bridge, which is free. Many of the clubs offer day tickets. There is also a 2 ½ mile private beat at Ballintemple, which takes 6 rods and there are discounts available to those staying at the lodge or self catering cottages.

One of the pools on the private fishery at Ballintemple.