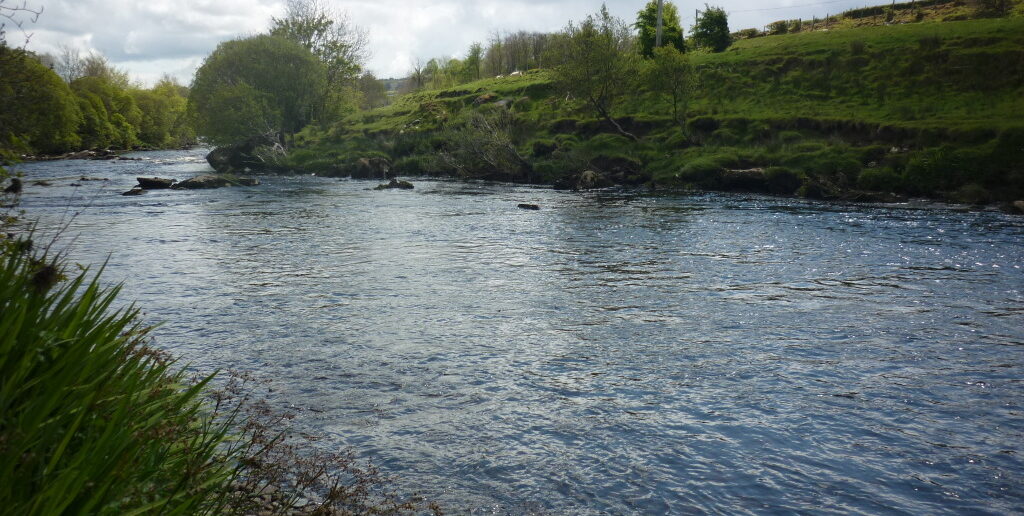 The River Finn rises in Lough Finn (County Donegal) and flows due East, past, Cloghan, Ballybofey, Stranorlar, Killygordon, Liscooley, Castlefinn, and Clady, on its way towards its confluence with the Mourne and the Foyle, just above Lifford. Together with its tributary, the Reelan, it is one of the most prolific Salmon systems in the country. There are more than 25 miles of fishing on the River Finn, from Bellanamore Bridge (up near Lough Finn), right down to Flushtown.

The landscape from the upper River Finn, down as far as Ballybofey, is one of rugged beauty, as the river passes through a deep mountain valley. In these upper reaches it is very much a spate river. There are lots of streams and glides, which make it excellent for fly fishing. The confluence of the River Finn and its tributary, the River Reelan, is just above Ivy Bridge (about a mile below Cloghan). The Reelan is also very much a spate river and is just as good for the fly (some would say, even better than the River Finn!). Beyond Ballybofey the valley flattens out as the River Finn flows down to Castlefinn. In this stretch the river slows up and becomes deeper and less of a spate river. There is still some nice steamy water in parts of this stretch, particularly at Killygordon and Liscooley.

In spring the tides can back the River Finn right up to Castlefinn, and even the weaker tides can back it up to Clady. As you can imagine, because of the tidal qualities of the river below Castlefinn, it becomes progressively wider until it reaches its confluence with the River Mourne, just above Lifford. The season begins on the 1st of March and although there are fish taken right from the off, the best spring fishing is really around mid April. You can get springers right up to the confluence with the River Reelan (just above Ivy Bridge, below Cloghan Lodge).

The Grilse start running the River Finn in the middle of June and the peak of the fishing is from then until the end of July. In some seasons on the Finn, the numbers of running Grilse can be breath-taking. Many Grilse run the Reelan as well and the sport on the fly can be excellent on a spate.

With the multitudes of Salmon running the River Finn, you tend to forget about the poor old Sea Trout, but they are also there in big numbers. The best fishing is at Liscooley, Killygordon and anywhere from Ballybofey up to Lough Finn. If bait fishing is your method then there are very good holding pools at Killpadies on the lower River Finn and Donnyloop at Castlefinn. Check before you go though as these areas are sometimes closed for Springers.

This is the first fishery above the tide and it extends from Liscooley Bridge up to Flushtown Bridge. This part of the River Finn is over 50 metres wide in places, and you can fly fish it in high water, but spinning is the most successful method. Nearly any Devon minnow will take fish. Some people also fish the worms on this stretch. The Finn Fishery is better known for its spring fish and it’s usually very good from March through until the end of May. The Grilse tend to run through very quickly so the fishing is not so good after May. It’s not that great for the Sea Trout but there is some decent fishing around Clady, Donnyloop and at Castlefinn.

These beats are situated between Liscooley Bridge and Stranorlar on the River Finn. Most of the fishing is in deepish, slow water but there are some good streams for the fly. The beats are good for spring fish from March to May, and unlike the Finn fishery, the Grilse do slow down here and the fishing can be very good from June through until the end of July. These beats can be busy during the Springer season, but they’re not over-crowded, and they do slacken off a bit before the Grilse arrive. These beats start just below Stranorlar and extend up to about a mile below Glenmore Bridge (where the R252 crosses the River Finn). If you’re a fly fisher then this will suit your eye much better as it’s full of glides and streams.

You’ll still pick up the odd springer here from mid April through to mid June, but the beats are much better for Grilse. The Grilse do run pretty hard through here in a spate but fishing can be really good as the water fines down. The River Finn here is the epitome of a spate river, with the spates running off very quickly due to the steepness of the fall off in the river. The scenery here is breathtaking amongst the mountains of Donegal.

The River Reelan is also part of this fishery, and it also runs off at a very steep gradient from the Blue Stack Mountains. This is a beautiful little river for Grilse when the water is right. If you don’t live close by you’ll need to keep a close eye on the weather forecast and anticipate the spates. If you get it right you’ll be in for a great days fishing. Again, you can catch spring fish, even in this part of the Upper River Finn (from the Glenmore Bridge up to the Ivy Bridge), but Grilse are the main quarry up here, and they arrive in huge numbers. They arrive by mid June and continue running right through July. You can get Grilse right up to and beyond the Bellanamore Bridge.

This stretch also gets a run of autumn fish but with a season close of the 15th of September, fishing time for these beauties is limited. You generally fish fairly small shrimp flies on the Cloghan and Glenmore fisheries and as a result you’ll often take Sea Trout when fishing for Grilse. Some of the hairwing flies are also popular on this stretch of the River Finn.

To fish in Ireland you need a rod license from the appropriate fishing authority. You can find the details for the River Finn at:

As well as a rod license, you’ll need a permit to fish the River Finn. You can get permits from any of the following distributors:

The club has roughly 8 miles of double bank fishing, starting from just below Stanorlar and extending to about a mile downstream of Glenmore Bridge.

The club has about 14 or 15 miles of fishing all told. All of it’s fishing is between Liscooly Bridge and Stranorlar. Its a little fragmented and mixes with the Glebe club’s beats.

The Glebe club has 9 or 10 miles of fishing between Liscooly Bridge and Stranorlar. Its beats are intertwined with those of the Finn Angling Club