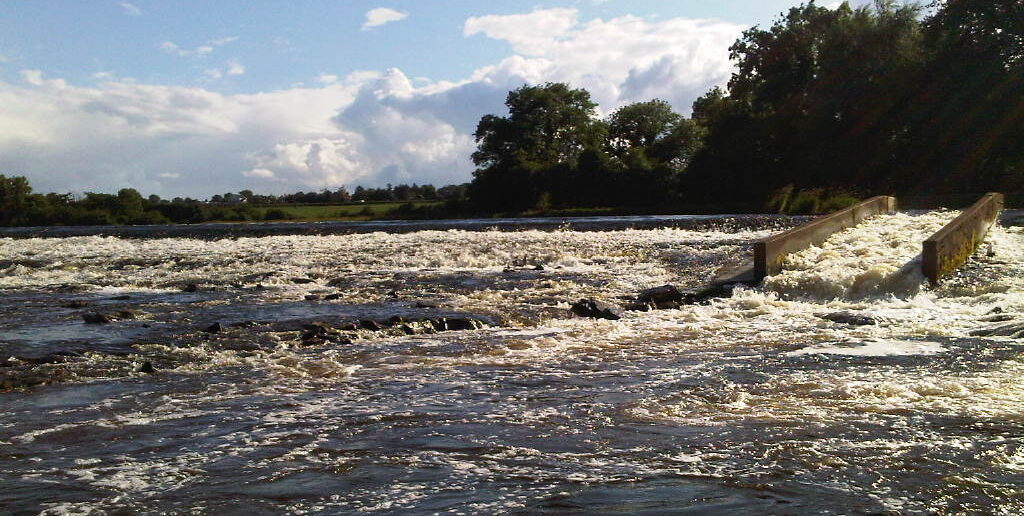 The River Mourne begins a couple of miles North West of the town of Newtonstewart, at the confluence with the River Derg. Upstream of here it becomes the River Strule, which is one of many tributaries of the Mourne. From its confluence with the Derg, the Mourne flows in a North Westerly direction, past Douglas Bridge, Victoria Bridge and Sion Mills on its way to join the Foyle at Strabane; a total of about 8 miles. The Mourne is a big, fast flowing river, which is more than 20 metres wide for almost all of its entire length. Over recent years it has developed a reputation as being right up there with the Finn, the Moy, the Lower Bann and the Munster Blackwater, as one of Ireland’s top Salmon fisheries. That’s hard to argue with as it’s estimated that upwards on 15,000 enter the Mourne each year.

The salmon fishing can be very good from the end of May onwards, with the peak months being June and July. The Mourne is not a spate river but like many other Irish rivers, it fishes best as the water fines down, but because of its size it usually fishes well for 3 or 4 days after the flood waters have receded. The Grilse will often press on unless the water is really low.

The river does get a few Springers from April to about mid-May. Likewise, it gets a few autumn fish and the sport can be good through September and October. From June onwards the Mourne gets a great run of Sea Trout.

You’ll hardly be surprised to hear that shrimp flies are very popular. Good patterns for the Mourne are the Bann Special, the Gold Shrimp, the Golden Grilse, the Grilse Fly, the Wilkinson’s Shrimp, the Curry’s Red, or the Apache Shrimp. Sizes are anything from 14 down to 6 depending on the water levels, with a sink tip line in higher water, and a floating line in lower water. The Sea Trout get up to about 3 lb with the average being around 1 lb. The larger trout arrive first in early to mid June with the bulk of smaller fish arriving from July onwards to the end of the season. Typical Sea Trout patterns such as, Peter Ross, Zulu, Teal Blue & Silver, Butchers, Silver Doctors, and Black Pennells will all take fish.

The lower part of the river is controlled by Sion Mills Angling club. The club also manages the stretches, which are under the control of the Department of Culture, Arts and Leisure (DCAL). The fishing on the upper river and on up to Newtonstewart (on the Strule) is owned by the Abercorn Estates (Baronscourt) and is privately let from there. The main part of the Sion Mills Angling club beats is at the limit of the tidal stretch near Sion Mills Weir. As the river is very wide here a double handed rod is order of the day. You’d don’t have to wade but it will improve your chances of fish. You’ll need chest waders and you’d be advised to bring a wading staff as the wading can be tricky. Check with the Sion Mills Angling Club for details of the pools on the fishery and where to gain access.

These beats start just downstream of the confluence with the Derg and most of it is actually on the River Strule, where there are sixteen pools. The entire fishery is divided up into four beats with over twenty-four named pools.

The most famous pool on the Mourne is part of the Abercorn fishery, and it’s known as the Snaa pool. It’s got a similar appearance to the Junction pool on the River Tweed. Other notables are the Half Water and Blackstone pools. These are also full of fish for much of the season. The fishing is let on four beats. Only two of these are let on any given day and there are only two rods available per day. The catch (no pun intended) is that fishing is only let with the accommodation, so it is relatively expensive, but worth it at least once.

To fish in Ireland you need a rod license from the appropriate fishing authority. You can find the details for the River Mourne at:

As well as a rod license, you’ll need a permit to fish the River Mourne. You can get permits from any of the following distributors: