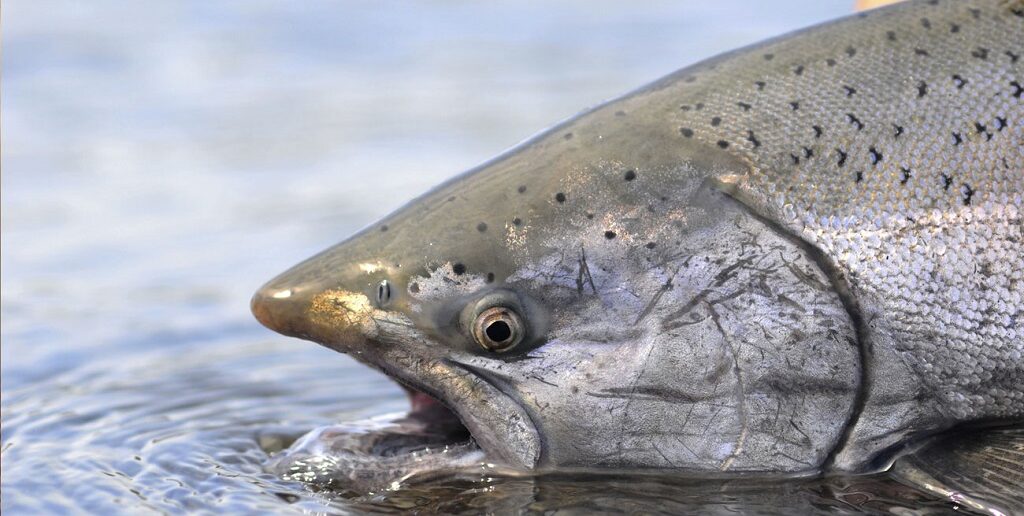 The River Easkey is spate river of some 12 miles, which flows out of Lough Easkey, high in the Ox Mountains of Counties Sligo and Mayo. The River flows North, ducking beneath the N59, Sligo to Ballina road at Workhouse Bridge, and on into the sea at the village of Easkey.

The upper part of the river above the Workhouse Bridge, ambles though both mountain bog and rough pastureland. Here the Easkey is full of lovely streams and pools, perfect for the fly. Below the bridge the river cuts through a few limestone gorges and some beautiful wooded areas.

The Easkey is primarily a Salmon River but also gets a decent run of Sea Trout, starting in June. The Grilse run starts from early June and fish continue running right through the end of the season. The river also gets a good few good autumn fish to 15 lb.

On the lower part of the river below the bridge in Easkey village, the fishing is free right down to the sea. This stretch has some nice pools for both bait and fly fishing. From the Easkey bridge up to Hanley’s falls (which is approximately 1km North of the Workhouse bridge on the N59), the river is privately managed by the Fortland Fishery. Since 2013,  the upper river from Hanley’s falls to the Workhouse bridge, and for 10km above the bridge, is managed by the River Easkey Angling Association (REAA).

The fishery consists of roughly 3 miles of double bank fishing, with 20 named pools. This part of the river used to be very over-grown but around the turn of the millennium it was bought over and completely transformed into a beautiful estate fishery. The fishing is let on 4 beats. This is the first beat above Easkey village and it extends up to Fortland Falls. There are 6 pools on the beat, with perhaps the best known of these being the Laundry Pool and the Sand Hole. This beat fishes really well in the early season and can have fish running in on the tides.

Beat 2 starts immediately above Fortland Falls and extends up to the Nursery Pool. The pools here are narrow and many are set between the rocky ledges of the gorge. This beat also has 6 main pools, all of which can be fished from the bank. The Nursery Pool is the main one on this beat and is perhaps the largest holding pool on the fishery. It is also very good for nighttime Sea Trout fishing.

Beat 3 is the last of the double bank fishing at Fortland as Beat 4 is single bank. This beat has 7 main pools, most of which are relatively shallow and good for the flies.

This beat has about 3/4 of a mile of single bank fishing, on the west bank. It has 4 main pools with lots of nice streamy water. The 2 deep pools below a waterfall are primarily bait pools. The remaining water is all nice fly water. The REAA offers some of the most inexpensive, yet productive salmon fishing in the country. Access to the REAA waters is from the Workhouse Bridge and from the roads which run south from the N59 on either side of the river. Signs showing access points and contact details for permits and advise can be found along these roads and also in the village of Dromore West. Information can also be found on the REAA Facebook page

Please note that membership of the REAA or holding a permit, insures anglers and entitles them to fish REAA waters. It does not entitle anglers to cross all private lands to access the river. Most landowners have no objection to this. Others require being consulted beforehand. If in doubt, keep to the riverbank, or seek the permission of the landowner before crossing private property.

This fast-flowing stretch runs from the bridge in Easkey village down to the sea, a distance of 700m. Notable spots include ‘the Falls’, ‘the Bench’ and ‘the Wall’. The lower section is tidal. This stretch can be both popular and productive when the fish are running. Access is by a concrete path along the eastern side of the river. Parking is at the sea between the river and the ‘Castle’. Permission is not usually required.

To fish in Ireland you need a rod license from the appropriate fishing authority. You can find the details for the River Easkey at:

As well as a rod license, you’ll need a permit to fish the River Easkey. You can get permits from any of the following distributors:

For permits/membership/Information, call the REAA: