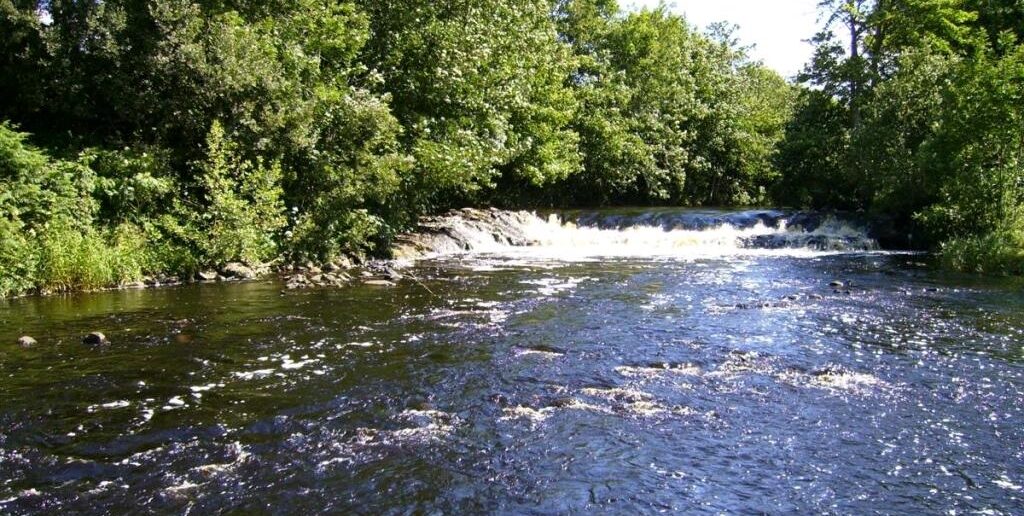 The Agivey River rises in the North Eastern Sperrins, and flows East past Ringsend and Garvagh, before entering the Lower Bann at Aghadowey (8 miles South of Coleraine). It’s a smallish river of about 5-10m wide but it’s one of the better Salmon Rivers in Northern Ireland.

The Agivey has about 12 miles of fishable Salmon water, and its tributary, the Wee Agivey, has 8 or so miles of mainly trout fishing. The very progressive Agivey Anglers association has worked tirelessly over the past number of years to create many good holding pools, and spawning grounds further up the river. Although not a spate river, it has spate-like qualities in that it drops off quickly after a flood. Still, it remains fishable, even in low water. Looking upstream from the Cullycapple Bridge

The river gets a few spring fish which average over 10lb and go up to 15lb. There really isn’t a big enough run of these to entice many anglers to break out their Salmon rod. The main run of Salmon (mostly Grilse of 4-6lb) starts in June and continues through July and August. Interestingly enough there have been some bigger, summer fish, banked over this past few years, including a 22lb 8oz fish in 2002. This may well be in part due to the demise of the Salmon traps on the Lower Bann at the Cutts. The best Salmon fishing on the River is really from the Swirl pool, which is just beyond the Broan Weir (off the Moneycarrie Road), down to the river’s confluence with the Lower Bann. There are many noted pools on this stretch, starting with the Barley Pool and O’Hara’s, both of which lie just below the Cullycapple Bridge, and Hegarty’s Pool, which lies just above the bridge. The Bull Hole just below the Swirl Pool

As you move up the river the next two notable pools are the Clay Hole and Barclay’s weir, which lie about half way between the Cullycapple Bridge and the Bovagh Bridge (where the Mullaghinch Road crosses the river).

Between Bovagh Bridge and the Broan Bridge (Broan Road) there are another four excellent pools, starting with perhaps the best spot on the river, Hunters Pool. The other three as you go up the river are, Betts Pool, The Rock Hole and the Doctor’s Weir. From here it’s another half mile or so up the Broan Weir, and on to the Swril pool. The fishing beyond that can also be good but on your first visit it might be better to concentrate on those pools I’ve mentioned. As a starting point you could do worse than to come off the A54 Agivey Road, at the Mullaghinch Road, and carry on to you come to the Bovagh Bridge. There you’ll see the old mill and Hunters Pool beyond. It’s as good a place as any to start your adventure on the Agivey. The Doctors Weir on the Agivey

To fish in Ireland you need a rod license from the appropriate fishing authority. You can find the details for the River Agivey at:

As well as a rod license, you’ll need a permit to fish the River Agivey. You can get permits from the following distributor:

The club leases the entire river, including its tributary, the Wee Agivey.