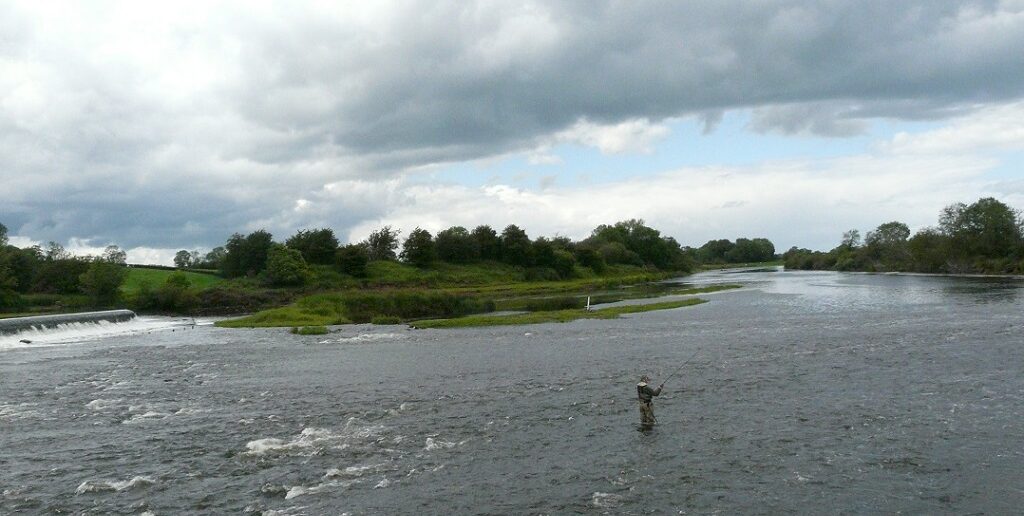 The Lower Bann is a large slow moving river, which flows north out of Lough Neagh until it reaches the sea near Castlerock. Most of its 38 mile length is between 100 and 300 yards wide, which wouldn’t necessarily remind you of prime Salmon water. Although the river is mostly sluggish there are half a dozen beats, with shallower, faster moving water, which together account for 2,000 – 3,000 Salmon each year, making it one of the most prolific Salmon Rivers in Ireland.

The Lower Bann fish are all headed for rivers, which branch off the main Bann system and Lough Neagh. Its direct tributaries are the Clady and the Agivey. The main Lough Neagh Rivers, include, the Moyola, the Ballinderry, the Maine and the Six Mile Water. The vast majority of these fish run the Lower Bann from early May, with the stragglers running right up to and past Christmas day.

The Lower Bann estuary (the Barr Mouth)The Lower Bann estuary extends for almost 7 miles right up to the Cutts at Coleraine. It’s a mixture of sand dunes and mud flats. It is also probably one of the best kept secrets in Irish angling. Most people associate the Lower Bann with Salmon fishing, but the estuary is also a great Sea Trout fishery. The fish average around 1lb but there are also large volumes of 2-3lb fish. Even now, its mostly only locals that fish this area.

The Sea Trout move in and out of the estuary with each tide, and in great numbers between June and September. The water is pretty clear right at the mouth of the river so light tackle is necessary to avoid spooking the fish. For this reason and, purely due to the size of the area, it is recommended that you enlist the services of a Bann System guide, at least for your first visit. The Cutts is situated about 1 mile South of Coleraine, on A54 (Kilrea Road) at the Cutts Lock. The lock is just past Castleroe village going towards Coleraine (coming from Kilrea, it’s on your right). On the opposite (East) bank, just downstream a couple of hundred yards, you’ll find the historic Mountsandel Fort, which is believed to have been the site of one of the earliest settlements in Ireland. Even then, they knew to stay close to a great source of Salmon.

The Cutts really marks the point where the water begins to turn brackish as its meets the tidal estuary. On the large rock sill at the Cutts you’ll see the famous (or infamous) Bann fish traps. These traps used to claim up to 2,500 fish every year but thankfully (for us) they were closed in 1995. Anglers only began to experiment with fishing here a few years back but so far it looks like a productive beat.

Although the beat is let to the Bann Estuary Angling Association, two day rods may be booked through the The Honourable The Irish Society’s Coleraine office (see towards the end of this page). Fishpal also takes bookings. Carnroe is perhaps one of the most sought after Salmon beats in Ireland. It’s on a par with the Snaa Pool on the Mourne, the Galway (Corrib) Fishery, Blackwater Lodge on the Munster Blackwater, Cloughan Lodge on the Finn and famous Ballina pools on the Moy. The beat lies just below the Carnroe Weir, which was constructed as part of the Lower Bann navigation system. Fish lie here in great numbers as they wait to get up over the weir. The highly oxygenated water is attractive to the resting fish and it also makes them willing takers.

The river below the weir is by in large sandy shallow ford, but there are a few places where a boat is necessary. Fishermen on this beat account for between 400 and 500 fish annually. Catch and Release is now mandatory. Resident ghillies are available at all times. Carnroe weir as the backdrop

The fishery has an eight rod limit for day tickets and six rods for syndicates. Both fly and bait fishing are permitted, but worming and multiple hook spinners are now banned. The peak run is in June and July but the fishing remains good right through August and September. As you can imagine, such a productive beat is in high demand, and with the rod limits, it is advisable to apply for your permit  at the tail end of the previous season. Day Tickets can be booked through Fishpal.

With the fast flowing water, it is not surprise that Fly Fishing is the main method. When fly fishing you should check the gauge because that will determine, which fly size is most suitable. When the water is relatively low (14.5 feet on the gauge) use 10s or 12s. At 15.5 feet use 8s or 10s and when the water is high (16 feet) you need to drop down to 6s and below. This is a spinning and bait beat just below Carnroe. The fishing is all by boats, which are provided by Bann System Limited.

This beat is situated at a natural bend in the river, just between Carnroe and the downstream part of the Movanagher Angling Club beat. It is just opposite the Movanagher fish farm. It is also a fast flowing stretch of the Lower Bann and as you’d expect Fly Fishing is again the method of choice. The beat accounts for good numbers of Salmon each year, and you’ve got the added bonus of having a shot at one of the plentiful 6-7lb brown trout. If the water is high you’re permitted to spin or use bait. Boats, permits and Ghillies are available through Bann System Ltd. Day rods are available via Fishpal.  Season rods can be booked through The Irish Society’s Coleraine office at, 54 Castleroe Road.  Tel:  +44 (0)28 7034 4796, or email: theirishsociety@btconnect.com

While, primarily a trout fishery, the Salmon fishing can be very good in low water, as the fish wait to run the weir. Single handed rods will be fine for this stretch, but you’ll need to wade, and because of the fast flowing water, wading can be difficult if you not an experienced wader (so beware). The trout fishery here is exceptional, with plenty of large specimens, up to 8lbs. As you can imagine, hooking one these big trout on a sedge on a summer evening is almost as good as it gets in trout fishing.

The beat is under the day to day control of the Movanagher Angling Club, but there are two rods reserved each day for visiting anglers which may be booked through the Fishpal website.

Portna is situated just upstream of Kilrea, at the end of the Portna road, which is just off the A54. This beat comes a close second to Carnroe, as the premier beat on the Lower Bann. The beat is actually split up into two sections. The first section is just below the sluice gates (see image below), while the second section is downstream of the old eel traps. In between the two, along the West bank, is the Kilrea & District Angling club trout water. It might sound complicated now but when you drive in the Portna Road to the River, everything will fall into place (promise). Portna below the sluice gates

The first section (below the sluice gates) is fast flowing water, and wading, while not essential, is highly recommended. A note of caution though, the river bed here is very rocky and you should exercise great care when wading this section. Once you’re in there though, it is great fly water, and the chances of a fish are excellent, when they are running. Fly fishing is the most popular method, but you can spin (or even worm) in higher water.

The second section (below the eel traps) has slightly slower water but once again the fly fishing conditions are excellent. Both sections also hold quite a number of decent sized trout.

This beat lies on the West bank of the river, directly between the two Portna beat sections. This quarter mile stretch is let to the Kilrea and District Angling Club. Although it’s primarily a trout fishery, salmon are also taken regularly. The historic eel fishery structures at the tail of this fishery add to the picturesque surroundings. To fish in Ireland you need a rod license from the appropriate fishing authority. You can find the details for the River Lower Bann at:

As well as a rod license, you’ll need a permit to fish the River Lower Bann. You can get permits for the private beats from Bann Systems:

The club has trout fishing rights on a stretch at Portna.

The club has a stretch on the main river close to Carnroe.