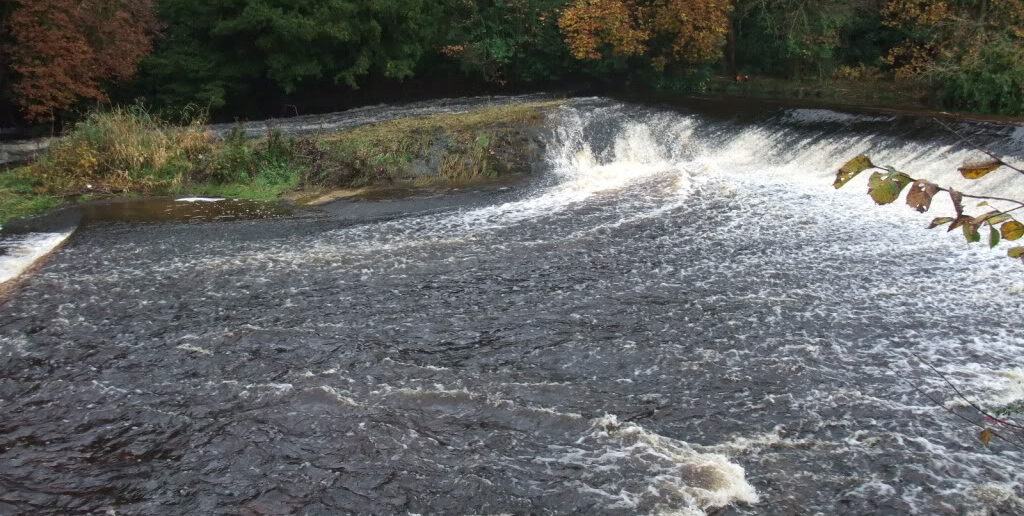 The River Moyola flows for 27 miles through the South Derry countryside, before emptying into the North West corner of Lough Neagh. It begins life high in the Sperrin mountains above Draperstown, and flows East towards Tobermore, before heading South East past Castledawson, on its way to the biggest freshwater lake in the British Isles. The old railway bridge at Castledawson

The top of the river is only 3-5m wide, and here it shows very spate-like qualities, right down to a point about a mile or so downstream of Draperstown. In this part of the river the floodwater runs off very quickly, usually within 4 or 5 hours. There are lots of streams and fast flowing water, broken up by some fairly deep but short pools. Castledawson – Upstream From The Humpback Bridge

As the river approaches Tobermore it widens out to 5-10m and slows down quite a bit. A couple of miles downstream from Tobermore, at Curran, floodwater can take a couple of days to run off. From here, to the confluence with Lough Neagh, the river is slower with long deep pools, although there is some fast flowing water either side of Castledawson, which is great fly water. Castledawson – Between the bridges

The Salmon start running the Moyola as early as the end of June, which is in stark contrast to its neighbour, the River Clady, where very few fish run until August. Its probably August though, before there are sufficient numbers to begin fishing in earnest. Prior to that you can have great sport with the large population of resident Brown Trout.

The upper reaches of the river are difficult to fish with lots of over-hanging trees, but if you’re there when the river is fining down from a flood, you’ve an excellent chance of a fish. Futher down towards, Tobermore and Castledawson, you’ll get a good couple of days fishing after high water. Between the bridges near Curran.

The Moyola also gets a good run of Lough Neagh trout, known as Dollaghan. These large trout are a little like Sea Trout, in that they run with the Salmon, and the best fishing tends to be at night. They are much darker than Sea Trout, and indeed the resident Brown Trout. During the day common Dollaghan fly patterns are the Mallard and Claret, the Connemara Black, the Fiery Brown and the Mallard and Claret. Anything around size 8 or 10 is good. At night you can catch dollaghan in any of the deep pools down the river. You’ll need big lures for nighttime fishing, such as the Wye Bug (size 4). Use a sinking line and hand line it slowly. I have heard of people dapping flies for dollaghan but you can experiment with that one if you wish. Speedys Bed at the Wheddle Bridge

The best places for the vistor to fish for Salmon are probably between Tobermore and a couple of miles downstream of Castledawson. There are lots of holding pools in this part of the river, especially around the village of Castledawson, down to the Thorn hole where the river goes under the A6 road. If you’re looking to get off the beaten track then you could do worse than have a throw up around Lisnamuck bridge where the river ducks under the B42 Lisnamuck Road. The Thorn Hole (near the A6 bridge)

To fish in Ireland you need a rod license from the appropriate fishing authority. You can find the details for the River Moyola at:

As well as a rod license, you’ll need a permit to fish the River Moyola. You can get permits from any of the following distributors:

The club leases the entire river.