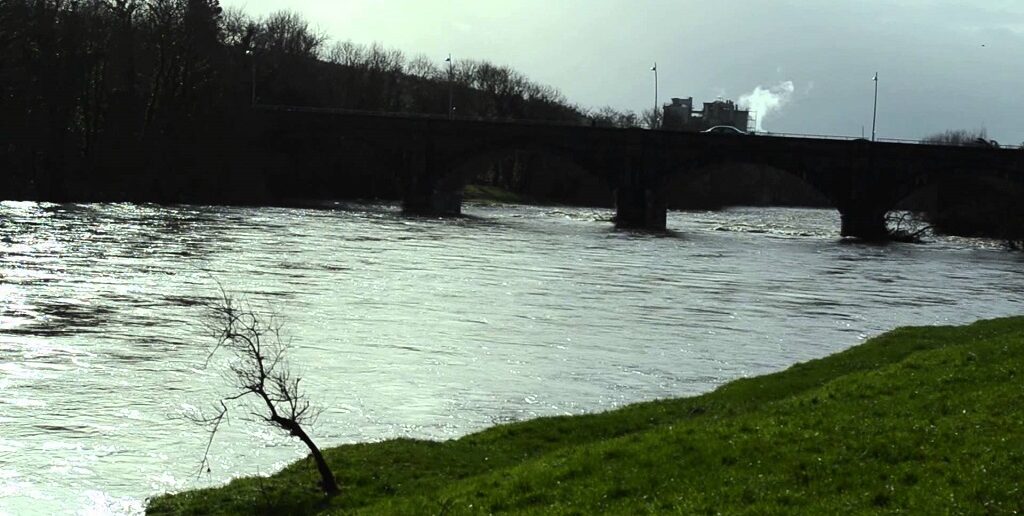 The River Feale rises in the Mullaghareirk Mountains of North West Cork, and flows in a Westerly direction through Mountcollins, Abbeyfeale and Listowel, on its way into the sea just below the Shannon estuary. The last 6 miles of the Feale are actually known as the Cashen River. The surrounding landscape is amongst the most beautiful in Ireland, with a mixture of heather covered bogs, lush green valleys and rolling hills.

This is a fast flowing spate river, which can get really high during persistent rain. Always check ahead before travelling to fish this one as a seemingly small amount of rain can put the Feale out of order. A feature of the Feale is the number of deep holding pools all along its course.

Fishing the River Feale.
The water usually runs clear but can have a dark peat stained appearance in flood conditions. The bottom has a lot of gravelly beds and the banks can be quite overgrown and steep in places. In places like this you’ll need wade, especially if you want to fish the flies.

Much of the wading requires Chest waders and can be reasonably difficult (except around Listowel). A wading staff can be a great addition to your equipment on the Feale. A rod of around 14 -15 foot will be required to cover the water.

The Pumphouse Flat pool at Listowel.
The spring Salmon fishing starts from the season open and continues through to about mid April. The Grilse run starts in mid June and extends through until the end of July, with the peak being the last two weeks in July, after the draft nets come off in the River Cashen. There is also a very good run of bigger autumn fish from mid August through until season end.

The Sea Trout fishing is also very good on the Feale from early May until the end of the season. The peak time for the White trout is from mid June into August. The average fish is just over the pound and they go right up to about 7lb. When Sea Trout fishing, downstream of Listowel is the hotspot for spinning, and up above Abbeyfeale is prime fly water (on the Mountcollins club water). The night time Sea Trout fishing here, is also well worth the effort, using medium sinking line.

The Feale from Finuge Bridge.
The fishing on the Feale is managed by five clubs, each of which offers day tickets for visiting anglers. There are stretches outside of the club waters (and on the tributaries), which are considered free, but make sure to check locally where these waters are situated on the Feale. The various club waters are well sign posted so you can’t go too far wrong.

This club has 4 miles from just downstream of Listowel. The Salmon and Grilse fishing here is very good. The Sea Trout tend to run through to the top of the club water but the fishing can be good. There is a fly only stretch at the Finuge Bridge.

The Hotel pool on the Feale (in Listowel).
This club has about 9 miles of fishing around Listowel and on the Smearlagh River, which is a tributary of the Feale. The club has spent a lot of money developing 4 good looking Salmon pools in Listowel town. The Sea Trout fishing is also very good in this stretch.

The Hotel pool is close to the centre of Listowel town and accounts for up to 200 Salmon each season, during spring and summer. The Pump House Flat is situated above Listowel’s main bridge. This is a bit flat expanse of water, which is very good when the water is high. Spinning is the most successful method.

The Bridge Stream is just West of Listowel town and is where the fly fisher should head first. There is plenty of nice fast flowing water in a couple of pools, and a good chance of a fish in medium to low water.

The Bridge Stream on the North Kerry Anglers water.

The club has just over 2 miles of fishing downstream of Kilmorna Bridge (about 3 miles downstream of Abbeyfeale). There are 15 named pools in this stretch and it holds plenty of Salmon.

This club has about 5 miles of water downstream of Abbeyfeale. This is very good Salmon water, especially in the summer. The Sea Trout fishing is best near the town itself.

This club has about 8 miles of double bank fishing, starting about ½ mile below the confluence with the Owveg River, and extending upstream about 1 mile past Mountcollins, to within ½ mile of the Ahane Bridge.

You can get some Grilse here but this is better known as an excellent Sea Trout fishery, starting from mid May and going through until the end of the season. Worming is not allowed when the water is clear, and maggots are not allowed at any time.