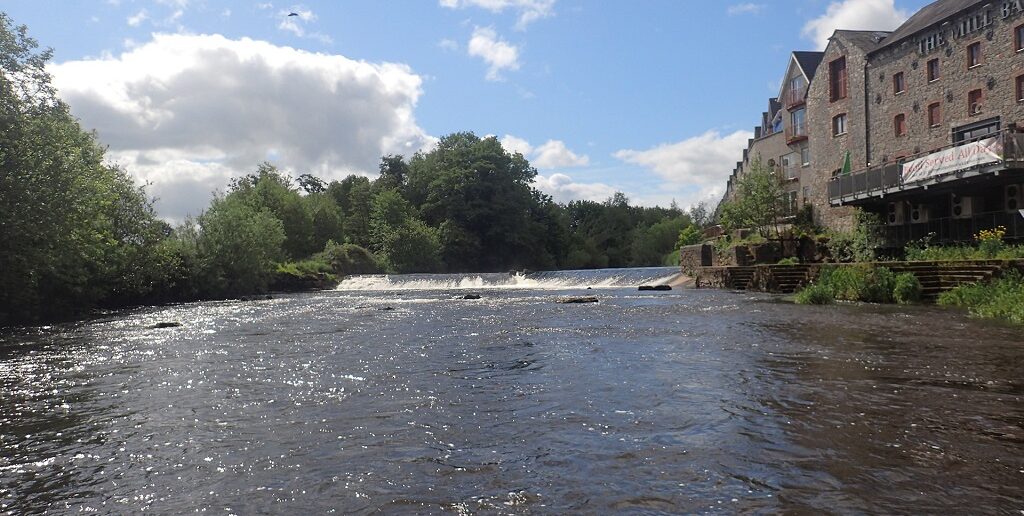 The River Mulcair rises in the Slieve Felim Mountain, close to Cappamore. The river flows south for a couple of miles before swinging up to the North West, past the Dromkeen, Abington, Ballyclough and Anncotty, to join up with the River Shannon about a mile or so upstream of the University of Limerick. The famous Castleconnell fishery on the Shannon is only 2 miles upstream form the confluence.

An aerial view of the River Mulcair.
This is a pretty big spate river with lots of nice streamy water intermingled with long and deep holding pools. Together with the Newport River, its main tributary, there is just over 20 miles of fishing. The River can go up and down very quickly with medium to heavy rainfall.

The Mulcair gets a few spring fish but its reputation is as a first class Grilse fishery. The springers run from mid March until May, with the best fishing being at the end of April. The Grilse run starts around the end of May and runs right through until season’s end on September the 30th. The best Grilse fishing is from mid June until the end of July, and it can be prolific during this period.

Fishing the River Mulcair just before dusk.
Some of the best early season stretches are below Annacotty weir, at Lanes Weir (below Annacotty bridge), and at Ballyclough. As the Grilse season gets up and running the best areas are, Long Field, Boher, Brittas and Dromkeen.

Annacotty weir on the Mulcair.
The Newport River (known as the Slievenohera River up to the confluence with the River Annagh), also gets a good run of Grilse and the fishing is generally good anywhere between Barringtons Bridge (the R506 crossing) and the Annagh Bridge, a distance of 3 miles and more.

It’s worth noting that you cannot fish within the 50 yards downstream of the Mull Weir at Ballyclough (near the N7) and from the 31st of May between New Road Bridge at Annacotty (also on the N7), 50 yards above Annacotty Weir

The Mulcair in a spate.
The River Mulcair also holds Brown Trout, and while relative small, they are certainly plentiful. The main spot is just downstream of Annacotty Bridge, and on the Newport River between Bunkey and Ballymackeogh.