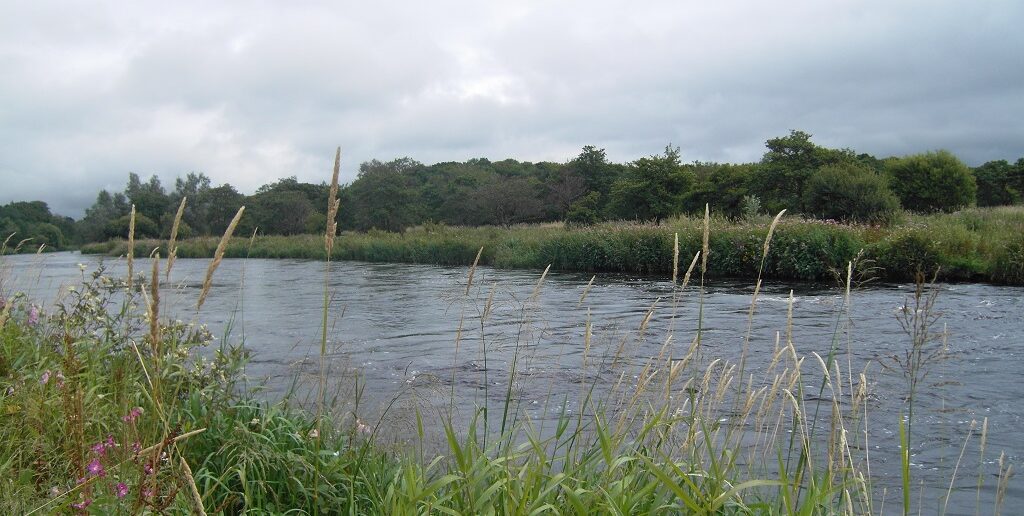 The River Shannon rises in the mountains of West Cavan, only a few miles from the border at Blacklion / Belcoo, and extends south for almost 160 miles where it enters the Sea at Limerick. On its journey it flows through three large loughs; Lough Allen, Lough Ree and Lough Derg.

The Upper River starts at the source in the Cuilcagh Mountains, and extends down to the ancient village of Shannonbridge (on the R357). From Shannonbridge down to the sea is known as the Lower Shannon and it is here that most of the Salmon fishing is to be found.

The Parteen Bridge over the Shannon.
In days gone by the Salmon ran the Shannon in huge numbers but the introduction of a hydroelectric power station in 1929, at Ardnacrusha (near Limerick), had a detrimental effect of the Salmon runs because of the inadequate fish pass on the dam above Parteen. The erection of this dam also greatly reduced the volume of the flow on the old river.

These days the ESB carefully manages the fishing on the Lower River, as well as on the Mulcair (the tributary near Limerick). The main fisheries on this lower part of the River are the Plassey, the Long Shore, the Castleconnell Fishery and the Meelick Fishery.

There is also excellent Brown Trout fishing on the Upper River and on its main tributaries, the Suck, Inny, Brosna, Little Brosna, and Camlin. Let’s look at the Salmon fisheries, starting from the tide:

The Plassey fishery is situated on both banks near the University of Limerick. Rather surprisingly the water here is streamy and the fly fishing can be very good for Springers and excellent when the Grilse are running.

The Plassey fishery on the River Shannon.
The Grilse run starts at the beginning of May and continues through the summer. All of the Grilse bound for the Mulcair must pass through here so the opportunities are plentiful.

The Plassey stretch has an unlimited number of annual permits (for boats and from the bank) and the fishing can get quite crowded despite the size of the river.

The Long Shore is situated on the right bank downstream of the Ardnacrusha power station. It is a very good spring fishery from mid March through to the end of April.

The river is very wide and deep here (about ½ a mile) and the vast majority of anglers fish from boats.

The Castleconnell fishery runs close by the old village of Castleconnell and comprises of about 4.5 miles of fishing. This is probably the most famous of the Shannon Salmon fisheries, with a long and glorious history of producing large numbers of fish.

The Castleconnell fishery.
The fishery has changed over the years to cope with the reduced water flow, as a result of the dam construction (for the powerstation at Ardnacrusha). The fishery managers have done a good job of creating new pools, whilst retaining many of the old pools. The dam is not all bad as it controls the water levels even when the rain is scarce.

The fishery is divided into eight beats, of about 1/2 a mile each in length. Half of them take 3 rods and the other half, 2 rods. The beats are rotated daily. Most of the pools can be fished from the bank and in places that cannot, they can be reached by boat. A 14ft double hander will let you cover the pools easily but a single hander will be fine in some areas. If you wade, you’ll need chest waders and a staff, although beat 8 is the only one where it is really necessary.

The River Shannon at the Castleconnell fishery.
A sprinkling of springers, arrive through February and March but the runs are nothing like they used to be in the past, when the Shannon was famous for its big spring fish (up to 45 lb). In April and May, the river here gets a further run of spring fish known as the ‘April fliers’.

The Grilse run through from mid May until the end of June and into July. The Grilse fly fishing at Castleconnell has a world wide reputation as being excellent, and that is not without foundation. The fishery also gets a decent run of autumn fish passing through but August can be quiet, with September being just average.

The Meelick fishery is situated near the village of Meelick, above Lough Derg, which is about 5 miles down stream from Banagher (on the R356). This part of the river is very wide and has quite a few islands sprinkled over its course. Between the islands the water is relatively shallow and streamy with some nice salmon fishing stretches.

A perfect evening on the Meelick fishery.
The water levels above the fishery are controlled by weirs and this has a big bearing on the quality of the fishing. When all of the sluice gates are closed the water will be low and the fish are hard to move but when some are open the flow increases and so do the chances of moving a fish

This is very much a Grilse fishery although it does get a few springers. The Grilse run from early June through until the end of July, with the best of the fishing from late June onwards.

The two prime areas are above the pump house (where the electric wires cross the river) and just above the weir, when the fish are running. The pool at the confluence with the Little Brosna can be very good as well, especially when some of the gates are open on Shaughnessy’s Weir.

Looking away from the weir at Meelick.
It is possible to fish from the bank when approaching from the West (the Offaly side), but it is mainly by boat when approaching from the East (the Eyrecourt side). Boats can be launched from the Canal Mouth and Victoria Lock. The size of this fishery can be a little daunting and with no Ghillies you’re basically on your own. The best method to get started is to look at how the locals approach it.

Be very careful when wading the streamy water and be sure to use a wading staff. If possible it is better to use a boat, which you’ll have to provide yourself.

The Upper Shannon is primarily Brown Trout fishing. The fishing starts just below Lough Allen and extends down to just below Battle Bridge near Leitrim village. This is free fishing and with plenty of trout up to 2lb and the occasional monster to 7-8lb it is well worth a throw.

There is also a very good trout stretch at Tarmonbarry (on the N5). The fishing is good above the village and also downstream of the weir and the confluence of the Feorish River.