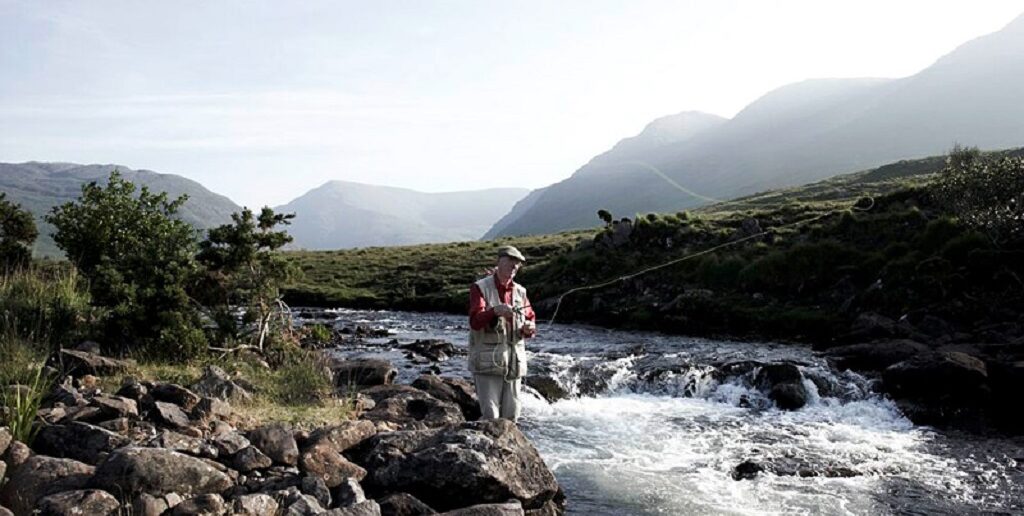 The Bundorragha River is part of the famous Delphi fishery in County Mayo. As well as the river, the fishery contains Finlough and Doolough, which also produce plenty of Salmon and Sea Trout every season.

Fishing the Bundorragha River (Delphi Fishery).
The Bundorragha flows out of Finlough and makes its way South into Killary harbour, just 1 ½ miles downstream. Like many of its Mayo counterparts the Delphi fishery is set amongst some of the most beautiful mountain scenery in Ireland.

The river has 19 named pools, many of which were created in the latter part of the 17th century, by the addition of stone weirs all along the river. Being such a short river you’d expect the fish to run right through to the Loughs but instead they hold up in many of these pools.

Beautiful backdrop on the Bundorragha River.
The Delphi is a good spring salmon fishery and you can get them from opening day at the start of February, until the end of May. There are plenty of fish, but like many spring fisheries these days you may need a good deal of patience to get bent into one. It’ll be worth it though if you do, because the average is close to double figures.

The excellent Grilse run starts at the tail end of May and lasts through the summer, with July being the best month. The average Grilse is around the 4-5lb mark. The Delphi fishery also gets a small run of large summer fish, which can run to over 20lbs.

A quiet stretch on the Delphi Fishery (Bundorragha River).
The fishery takes 12 rods per day and the fishing is rotated on a half day basis between the river and the Loughs. The best chances of a Salmon are on the river but in low water the Loughs can also be very productive.

You can use up to a 14 foot double handed rod on the river, but a single handed 11 footer is fine for almost all of the fishing. You don’t need to worry about wading as it’s not necessary, nor is it allowed. A 9-11 foot rod is fine on the Loughs. You don’t need a Ghillie on the river but you’d be better with one on Finlough, and they are mandatory on Doolough.

The Bundorragha River in spate.
The Delphi Fishery was once famed for its large runs of Sea Trout but sadly the stocks have declined drastically in recent years due to the Salmon farming and the subsequent infestations of sea lice. There are still a few Sea Trout about but they are normally caught as a by product of the Salmon fishing. Sea Trout must be released alive, back into the river (or Lough).

To make up for the lack of Sea Trout the Delphi Fishery has its own hatchery, which releases thousands of extra Salmon smolts each year. These fish have their adipose fin clipped and are then tagged before being released back into the river. If you catch one of these fish when they return from the Sea, you must kill it as part of the research program on the Delphi. All of the wild fish must be returned to the water unharmed.