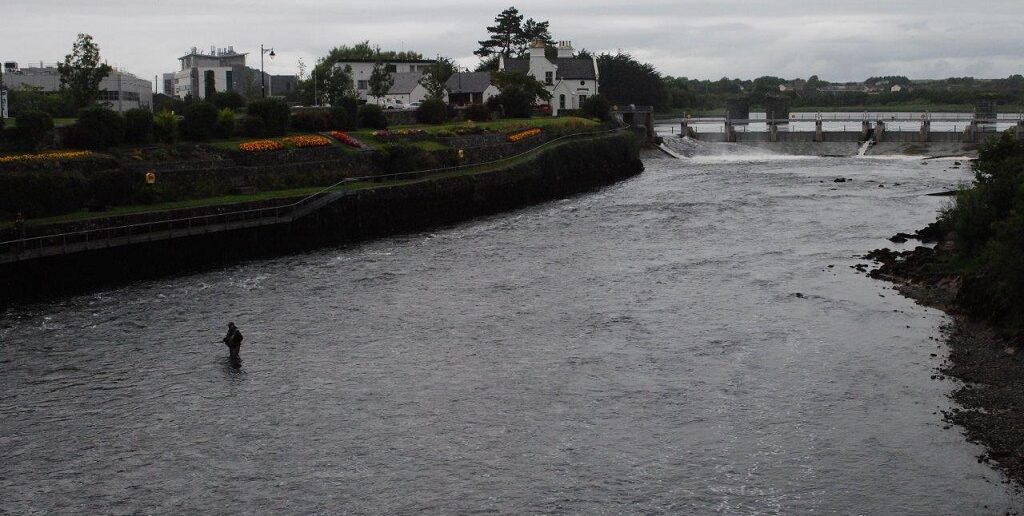 The River Corrib flows out of Lough Corrib, and makes its way through the countryside before passing through the City of Galway on its way into Galway Bay; a journey of just over 5 miles.

The River Corrib contains a highly sought after stretch known as the Galway Fishery, which extends for about 250 yards from the weir, down to the Salmon Weir bridge, in the heart of Galway city centre.

Fishing the Galway Fishery on the River Corrib in medium water.
The Galway weir is actually over 4 miles downstream from Lough Corrib but it is used to control the water levels on the Lough. It contains 16 hydraulic gates, which can be opened and closed to regulate the water levels.

The spring fishing, which is fair, begins almost as soon as the season opens in February and the fish average around the 12lb mark. The Grilse run is prolific and it starts at the end of May and extends right throughout the summer, with June being the best month. There is also a decent run of autumn fish.

The River Corrib gets a large run of Sea Trout, albeit they are pretty small. The run starts in early June and peaks around the middle of July. The majority of the fishing is done by locals in the Nimmo’s pier stretch at the tide.

This fishery starts at Friars Cut just below Lough Corrib, and extends right down to the weir in Galway city, which is a span of some 4 ½ miles. As you can imagine the water is deep and slow as it gets backed up behind the weir.

The River Corrib above the weir at NUI.
This stretch is fished for Salmon but it’s mostly spinning and trolling from a boat. It also holds some Brown Trout and lots of coarse fish.

This fishery starts from just below the weir and extends the short distance of 250 yards down to the Salmon Weir Bridge. It’s one of the most prolific salmon fisheries in Ireland as the fish queue up to navigate the weir. You’ll need to apply for a permit well in advance as the fishery only takes 6 rods per session and the demand is always really high, especially in June and July.

The River Corrib’s Galway Fishery in lowish water.
There are also fly only evening sessions, after the regular sessions have ended. These last from, either 7 p.m. or 8.30 p.m. until dark, depending on the timing of the regular sessions. These sessions are generally bookable on the day.

The fishing on the Galway Fishery is not straight forward. You’ll need a double handed rod, chest waders, and a wading staff to give you the best opportunity to land a fish. You’ll also need to cast a reasonable length of line to get out across the flow, and mending the line is essential to enable a good presentation of the fly. As with many of the more heavily fished beats in Ireland, you’re expected to fish down the pool at a reasonable pace, then step out and make your way back to the head before starting over again.

For the fly fishing, you’ll need at least an intermediate in the spring and a sink tip in the summer. Your spring leader should be at least 15lb, with 12lb being enough for grilse. For those anglers who prefer spinning you should probably go with a 10-13 foot rod and around 20lb line. The Shrimp setup is similar, and most of the shrimp fishing is from the high west bank and at Jimmy’s pool near the weir.

Into a springer on the Galway Fishery.
The spring run starts from opening day but the peak is through April and the first week in May. The fishing is best when 6 or more of the hydraulic gates are closed on the weir. As for flies, tubes and trebles, as big as size 4 are the order of the day.

The grilse run peaks over the course of June and into the first couple of weeks in July. The best fishing is when there is a good flow of water coming down through the weir. If you happen to be there in low water then the best fishing will be in the early morning or just before dusk, and the fishing will most likely be fly only, except for the last two hours of the session, or when there are fewer than 2 gates open on the weir, in which case spinning and the shrimp are allowed.

This beat runs from the downstream side of the Salmon Weir Bridge until the traps. The river is tidal here and can be prone to flooding so you are taking you chances while booking in advance. It takes 4 rods. The fishing on this beat is usually from the man made walkway at the side of the river.

Looking down the New Beat on the River Corrib.

This is the final Salmon stretch which runs from Mc Donagh’s turbine down to Nimmo’s Pier, which is at the entrance to Galway Bay. This is for local anglers only.

At various locations within the city of Galway you have old canals running off the Corrib River and some of these contain good numbers of sizable trout, due to their limestone bottoms. The average fish is somewhere approaching 1 ½ lb and the fishing is free, so if you’ve got the kids with you, you could do worse than take them to one of the canals.

Unusually for canals, most of the water is clear enough that you can actually see some of the trout. You can fly fish for the trout as the canals do have hatches of the most common Irish flies, such as Olives, Sedges and yes, Midges! Some of these canals are also stocked by the Western Regional Fisheries Board (WRFB) so there is always a chance of catching your tea.