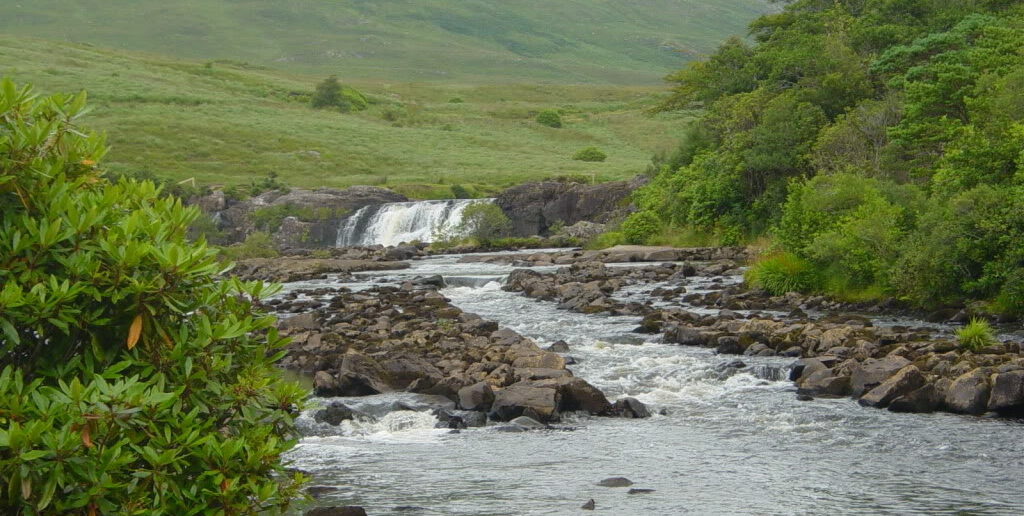 The River Erriff rises some 15 miles North East of Killary harbour in County Mayo, and flows South West on almost the same path as the N59, until it enters the Harbour just downstream of the village of Aasleagh.

The river is has over 20 miles of water but the last 8 miles is of most interest to the Salmon angler, starting from Shrahlea Bridge, and running down to Killary Harbour. The river banks are well developed and deep wading is not required despite the river being quite wide in places.

It is a classic spate river, characterised by lots of deep holding pools, punctuated by plenty of nice streams and glides. The fishery runs through a beautiful glacial valley and the stunning scenery is capped off with the magical Aasleagh Falls just above the sea.

The Erriff near Leenane, below Aasleagh Falls.
The Erriff spring fishing is average with May being the peak month. The river gets and excellent run of Grilse, starting in June and running right through until the end of the season, with July, August and September being the peak season. The river also gets a good run of bigger summer fish averaging around 9lbs. The Sea trout runs are from early July onwards, but like many Western rivers they are not as good as they once were.

The fishery is controlled by the Central Fisheries board and is managed from Aasleagh Lodge. It is divided up into 9 beats, most of which take only two rods, with a few taking 3 for 22 rods in total. The vast majority of the fish are taken on the fly. In spate you’d be better with a double handed rod but in normal conditions a single hander is fine.

Nice fly water on the River Erriff.
The beats are numbered from 1, starting at Shrahlea Bridge, up to 9, which is the first above the sea (so the higher the number the further downstream). Over 60% of the fish on the Erriff are taken on beat 9 (which is where the Aasleagh Falls are situated). Beats 3 and 6 account for about 10% each of the total catch, whilst beats, 1, 2, 3 and 8, would be the least productive for Salmon, but 1 and 2 are good for Sea Trout night fishing.

Of the Loughs on the Erriff system, Tawnyard is the one of most interest. It covers an area of around 250 acres and can be very good for Sea Trout and Grilse. The Lough is fly fishing only and dapping is allowed. A boat is essential to cover most of Lough Tawnyard.